The Cognitive Level of (Poetry) Analysis 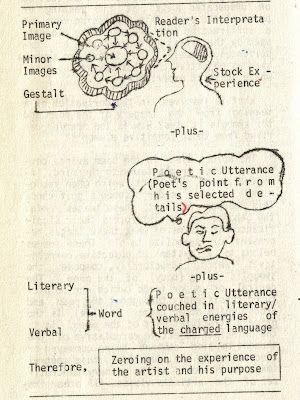 The impression of a meaning from the preceding level (sensory-impressionistic) of analysis will at best be an “uneducated guess” at the meaning or point of the poem. This impression must get a confirmation from the objective elements used by the artist in concretizing his experiences; namely, the images and symbols used as objective correlatives of the erstwhile abstract experience.

What is involved in the derivation of a meaning from the imagery of the poem and the symbols it uses? How is the meaning derived from these cognitive elements?

The words used in the poem evince certain pictures or phantasms in the mind (imagination and intellect) which when recognized by the reader assumed significance. This depends on what these images remind the beholder of. He interprets their significance in terms of what these images represent or symbolize to him. These images belong to a system of objective correlatives (1) which, structurally, compose the symbolic being (body) of the poem.

The central or major image (which can be pictured consistently throughout the poem and around which other images revolve) is the primary structural part of the poem. It is the principal objective correlative of the thought-emotion combination being conveyed or concretized by the poem. It is this central image which looms as the primary concretizer of the artist’s vision. All other images should have a logical and functional relationship with the primary image – they should make the central image clearer and richer as a symbol. The coherence of these images into a single experience engenders the reader’s recognition of a gestalt. This is the springboard for the assignation of a “meaning”.

These images may be visual, auditory, gustatory, olfactory, thermal-kinaesthetic, erotic-sensual, visceral, and synaesthetic. The external senses become the channels from which these pictures proceed. Lumps of images may be put together and assume the linguistic form of a figure (of speech, thought, or language). (2) The reader should also be able to recognize these figures so that he may see or sense the unified experience in the poetic gestalt.

(2) For a definition of these devices, see Freidman and McLaughlin, Poetry: an Introduction to its Form and Art. Harper & Row, N.Y. 1963.


The appreciator should be able to single out the primary structural part of the following poem so that he may experience a gestalt of the poetic expression. Upon this picture will depend his interpretation of the meaning or point of the objective elements used by the artist in the poem.

Interpretation refers to the reader’s assignation of significance to those images and symbols he comes to recognize when confronted by the structural composition of the poem. This definition is necessary in order to distinguish this activity from the reader’s other activity of determining the context or situation chosen by the artist to couch in his experience. The latter, termed “poetic utterance” for want of a better word, is the “content” (subject matter -- as distinguishable human experience or expression of the human condition) selected by the artist to objectify his aesthetic experience with. It is this “context” which qualifies, conditions, or even delimits the interpretation or the range of significance given by the reader to the poem’s objective elements – images and symbols. In other words, recognition of this context will not permit a running away of the beholder’s interpretation (which is after all based on his stock of experiences, something which could easily degenerate into a mnemonic irrelevancy – the attribution of meaning which is not based on the textual material, but “inspired” by private bias or prejudice.

Snow falling and night falling fast oh fast
In a field I looked into going past,
And the ground almost covered smooth in snow,
But a few weeds and stubble showing last.

And lonely as it is, that loneliness
Will become more lonely ere it will be less—
A blanker whiteness of benighted snow
With no expression, nothing to express.

Looking at the structural parts of the poem in order to arrive at a gestalt, the reader will easily be confronted by the looming primary image of the “desert of snow” (a conceit). It is the central picture which suffuses the four stanzas. What does this image mean? Does it concretize an experience? What is the experience? Whose experience is it?

From certain vicarious if not stock experiences, the reader will conjure in his imagination the picture of a desert which he invariably should associate with the barrenness, thirst, petrified skulls of dead animals, vultures, cacti, heat, twilight, coldness, frigidity, even Western movies. The “snow” should also be associated with dead things, biting frost (no pun intended on the author’s name), emptiness, the blank whiteness of snow (not the snow of Christmas). As a conceit, the primary image, therefore, should concretize an experience of emptiness, barrenness, the gloom of desolation and destruction.

What about the minor images used by the artist? Do they harden the primary image in such a manner that it becomes clear enough to impinge on the reader’s ken? The visual image of falling snow, the few weeds and stubble showing last, the blank whiteness of snow, the empty spaces, do they all suggest the emptiness, barrenness, physical and psychological desolation suggested by the primary structural part – the desert of snow.

Are the preceding interpretations correct? Do they come close to the identification and recognition of the experience? These questions can be answered by the appreciator’s going through the poem again and finding out for himself in what context the artist used those major and minor images. (3)

(1) An objective correlative is ordinarily a verifiable and observable physical structure which represent or concretizes an otherwise abstract idea or feeling. In the course of selecting his materials, the poet singles out certain correlatives which are normally associated with the emotion of idea being objectified. Images are classified as objective correlatives. These images may belong to a system of unified images called imagery. Imagery is the system of images used by the poet in order to concretize or objectify the subject matter or experience. Images must be precise, clear, familiar, and hard. They must be consistent to the theme. They must conform to a logical design. To be interesting, they must be fresh and original.

The structural parts of the poem and its unified design may also serve as an objective correlative most specially in Imagism where ideographic devices are used.

(3) Context refers to the situation (the who, what, when, where, why, and how of a situation) used by the poet to objectify his aesthetic experience with. It could be a dramatic event, an assertion, or an argument. (Friedman and McLaughlin, op. cit.)

(Next: Part 4: The Associative Level of (Poetry) Analysis)