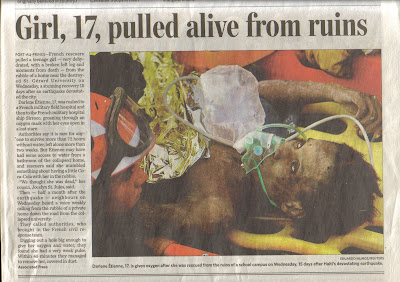 (Click on image to zoom in on Text)
PORT-AU-PRINCE --- French rescuers pulled a teenage girl...very dehydrated, with a broken left leg and moments from death...from the rubble of a home near the destroyed St. Gerard University on Wednesday (January 27). a stunning recovery 15 days after an earthquake devastated the city...Darlene Etienne, 17, was rushed to a field hospital...groaning through an oxygen mask with her eyes open in a lost stare. ---The Toronto Star, January 28, 2009, Catastrophe in Haiti.
DARLENE ETIENNE, 17
How will your story be told, Du-du cheri,
Without the Lazarus lore tacked on it,
Limbs now freed of crucifying rubble?
In the terrifying gloom of broken days
Or broken nights, whichever endless waking
Found a harbour from pain, wherever fear
Dragged you to a cliff where you could smell
The brine of the bay and hear the muffled
Urgency of a gecko's staccato counting time
Where time sits still between shadows seen
Through cracked spaces and ebbing groans,
Did you cry for a little more time, pray for
A little more light, sing childhood lullabies
Or whistle for the wind: Mon Dieu, a cri d'couer
A lonely whisper echoing from walls fallen
In other rooms, other voices hushed in silent
Anger: O, St. Gerard, O, Mother of God,
Salve, salve, salve. Seigneur, Mon Dieu! Salve!
But you have become like your shattered country,
Darlene --- these wounds shall not hurt you,
Like La Belle Haiti endured the penury lashed deep
Upon the gnarled backs of peons singing creole
Songs in the wind-swept canefields verdant
With razor-edged leaves that hide their tears
From their carousing children who would one day
See a Haiti free, Le Isle de Hispaniola an isle
Shorn of the filthy gens d'armes, the rowdy Yanqui,
And Mon Dieu, from the ladrones of the Spanish
Galleon who harvested both garlic and gold,
Or traded peons young and old for pesetas to lick
The fetid hands of donnas, duennas, damas
Y caballeros sin caballos, sin verguenza, y
Todos barbaros de Francia, Espana, y America!
Basta ya, basta ya, las barbaridades!

The shackles of this temblor will not hurt you,
Darlene, but the garrottes of freedom will;
We know them now as dollars and cents, tourists
and tourism, just as your people paid back the Yanqui
Ransom that freed you from France, only to be yoked
By French-manque Duvaliers, or defrocked friars
Like Aristide --- horsemen of your apocalypse
That straddles your country's hills and laves your
Haiti's beaches and shores. To be free is to be enslaved.

But was your lost stare a confused reckoning
Of new found puissance? These rubble shall not bury
You, cheri, for you will rise scarred but ramrod certain
That rancour nurtured well in your heart and soul
For this rapier from Reapers unknown will invigorate you.
Though ripped and routed and retreating into some hell,
Your people will learn to rule
A haven For Haitians, as Haiti is for Haitians,
And temblors be damned. 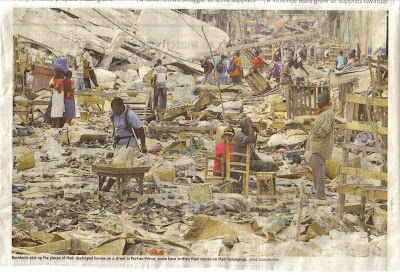 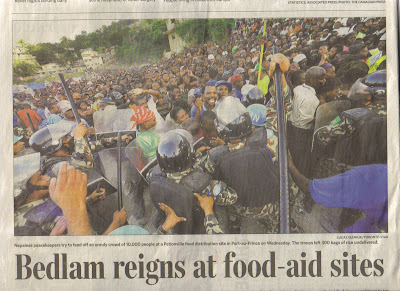 Apres Darlene Etienne, Le Deluge? (For an update on Haiti, see http://albertbcasuga.blogspot.com/ for The Economist, Jan. 28 story on how Haiti's people have learned to bind their wounds, and learn how to glare back at "volunteers who throw the relief goods at the people instead of distributing them in organized manner."

Many thanks for sharing this very good article. Very interesting ideas! sbobet88

Many thanks for sharing this very good article. s1288 Very interesting ideas!