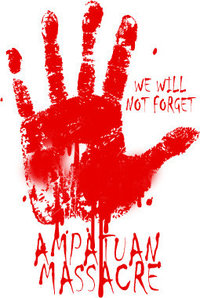 
The People's Revolution was heard around the world.


A coalition of the Church, Business, the Intelligentsia, Universities, and Religious orders (nuns, seminarians) stoked the anger of the impoverished proletarian living along the railroads, esteros, ghettos of the inner city, farms, the slums, and along the banks of Pasig River, and this curious aggrupation of protesters indicated their espousal of the massmen's plea for amelioration.


When the Movement astonishingly toppled the government of President Ferdinand Marcos who ironically refused to sic the army on the street demonstrators, the gawking world recalled: these were the same people who toppled the colonial rules of Spain (400 years) and America (on-going?).


And the books all around the world have been written -- but not one was written by any of the henchmen of Mr. Marcos. The late Adrian E. Cristobal, presidential spokesman, died with nary a pip about what led to the toppling or in defence of Marcos. Then Press Secretary Francisco Tatad wrote a book on another deposed President, Joseph Estrada, (much later) but nothing on Marcos -- he was the principal speech writer of Marcos. Johnny Tuvera, a writer and Marcos' Presidential Assistant, died without writing about the longest ruling Philippine President. Presidential Executive Secretary Jacobo Clave, a journalist, was mum. Was this an admission that the People's Revolution was authentic and, therefore, justified as an expression of the sovereign will?


But the signs were there. Protest literature abounded.


Isagani Cruz, an academic and playwright, wrote Sakada, got it staged, and it rallied idealists behind the movement, not the least of whom were artists and his students. He asked me to write a song for the play. I obliged with the following -- my version of a "protest poem" which I wrote in Filipino without thinking of how I would write it in English (if I had to). It was my first Tagalog/Filipino poem, and even to this day, it defies translation, even my own. So, I reprint it here without translation -- may better poets translate the same at least for posterity (or even for the archives).


I wrote Death by the Bridge immediately after a slain student demonstrator was shown in the media clutching his red banner in one of the marches that preceded the People's Revolution. The late Alfredo N. Salanga, poet and editor, included the poem first published in the Sunday Times Magazine in a collection of protest literature long after the revolution had fizzled out.

It is time to cut the canes at the hacienda.

If to kill were as easy as to sing…*
O sing on, drunken friend!
We will gather the cane tomorrow!

It is the hunger on brown wrinkles
lined in the irony of parched lips
parted in smile that convulses
the clot of flames violent in the blood
of these gnoméd comrades now
crouched in the muck of this burning river.
The anger was good while it lasted.

*Added to the revised version published in my A Theory of Echoes and Other Poems (UST Publishing House, 2009).


Thereafter, protest poems were the fad of the day. The students came back to Literature classes and asked their professors to comment on their ``protest poems``. I knew I succeeded in making them think that literature was useful , after all.

For Emmanuel Lacaba, who died in combat, and Jason Montana who fights on.

Where blends the cane leaves with mist and rain
Blends the shadow and the movement,
Each defining courage from fear, fear from pain.

“It is the touch of skin or harsh point of crag
Makes the warrior brother to the rock,
It is crag offers the question between life and slug.”

By the wordless grief of a valley’s muffled groan.
“Bless the valley’s darkness, brothers of song,
Its pall fallen on grey lips, its silence on a moan.”
The night’s benediction is a promise of dawn.

“The last best fight, my brother;
Our blood on the tip of steel!”

Brother to the pulsing spring,
To the bushes and rocks, the wrath
Of days, of quietness descending.

“The last good fight, my brother;
Our blood on the open trail.”

A song arrested in his throat,
The steel tensile in grace,
His still point is a point of steel.

(First published in the Asia-Philippines Leader)

The People`s Revolution is still being written about by even the younger poets who were wee tots then. Some of the older poets have despaired somewhat. Jason Montana, who knows the crags and the rustle of grass and thicket and jungles, and bivouacs, has written about the post-revolution.