ALL IN A DAY'S WORK; A PROTEST POEM

ALL IN A DAY'S WORK: A PROTEST POEM

(Click on image to zoom in on picture and text.) 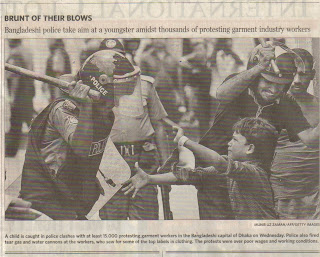 ALL IN A DAY’S WORK: GARMENTS
DYED ON WASHLINES IN DHAKA

Swatting flies off the sahib's table,
Slapping bloodsuckers off the soft skin
Of money changers in the Dhaka alleys,
Dumping discarded foetuses in rivers
Curdled with carcasses and dung:
All in a day’s work of a boy in Bangladesh.

Beating dread into brittle skeletal backs
Of scampering beggars, howling slumdogs
Praying for mercy while batons are rained
On loins to supplant the eked out alms
That could have bought this lad’s repast
Coming out of sweatshops drenched
With dye that reeked with bodes of dying:
All in a day’s work for the Rajah’s riot police.

Impressions swathed on mud-splattered
Garments strung in shanty town washlines
Wound tight on gnarled branches of trees
That will not grow beyond this lad’s height
When he creeps out in the night toward
The hills these armed bastards have driven
Him to, and he will come down a grown man
Of wraith-like limbs and dark sunken eyes
Burning with wrath and towering anger.

2. Looking Back in Anger

Decapitating the governor and his paramour,
He lisps: All in a day’s work for the child-slave
Who prayed for them to stop dumping batons
On his mother’s back: “Hit me! Beat me instead!”

They spared the splayed old woman grovelling
Atop a mound of scavenged used diapers
But did not think the better of him that time,
This waif, this little boy, running through
The streets begging for a little more rupiah,
A little more dried squid or corn for siblings
Around his table. The riot police jeered:

All in a day’s work for police and lads in Dhaka,
The proud city of Bangladesh, where label
Shirts of Tommy Hilfiger, Grenadier, Chaps,
Yves St. Laurent and Ralph Lauren are made.