EARTH POEMS AND THE WRATH OF DAYS 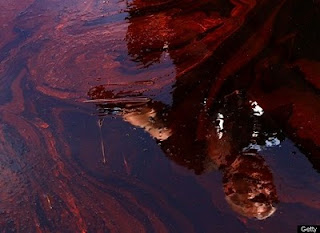 EARTH DAY POEMS AND THE WRATH OF DAYS

by Albert B. Casuga

It’s when I’m weary of considerations,/ And life is too much like a pathless wood.../ I’d like to get away from earth a while/ And then come back to it and begin over.../...Earth’s the right place for love:/ I don’t know where it’s likely to go better. --- Robert Frost, Birches

If you have lived through these and now blow fanfare
For Earth’s being the right place for love or maybe care,
You might yet begin to accept that Mother’s lullabies were
Also her gnashing of teeth when you wailed through nights
When slumber would have allowed her love not tantrums
Of infants grown now and “quartered in the hands of war”:

How else explain the wrath of days descending
not into quietness but pain? Has she not kept her anger
in check for all the tantrums of the Ages: Thermopylae,
Masada, Ilium, Pompeii? Hiroshima, Auschwitz, Nagasaki?
Stalin’s pogroms? The death chambers and Holocaust trains?
Polpot’s killing fields in Kampuchea? Rwanda’s genocide?

Before it lured tourist trekkers, the verboten Walls of China?
The Berlin Wall? The Gaza Wall? Fences of n.i.m.b.y.
neighbours: India and Pakistan, Iran and Iraq, splintered
Korea, the Irelands shorn of the emerald isles, the fractured
United Kingdom where the sun has finally set on its Empire,
the still haemorrhaging American southern states crippled
and still unyoked from black history but seething now
from the African-American’s irascible entitlement ---

With Zimbabwe’s apartheid, Congo’s rapes, Ethiopia’s
hunger, Sudan’s ceaseless putsch tango, Somalia’s piracy
trade, tribal wars in Uganda, Namibia, Botswana, Kenya,
will blacks overcome someday, soon? Only if they, too,
would get munitions from Venezuela’s bottomless vaults
gurgling with black gold, aceite y petroleo, and Oil of Ages.
Lubricator of the war and killing machines, In Oil we Trust.

3. THE SPILL AND FALL

Has it gone any better? Love on this piece of terra infirma?
That’s when Mother shushed you back to sleep,
An impatient rhythm clipping away what should have been
A gently lulling melody from the Song of Ages:


Rock-a-bye, baby on the treetop; when the wind blows,
The cradle will rock. When the bough breaks, the cradle
Will fall; and down will come baby, cradle, and all.


The bough breaks, and you scream. Too late for that.
This is not a dream. The freefall is Mother’s little slip
When she could no longer hold you still, somnolence
Finally taking over, and your cri d’couer, a scream
For help, for caress, for all the love gone from an empty room.
The cradle falls, she can’t pick it up. Exhausted and utterly
Spent, she mutters in her sleep: Spare the rod, spoil the child.

Tomorrow, if it comes, Mother will prop up --- backaches
Assault her waking days now --- will step into her plimsoll
As she would her dancing pumps, oil-soaked slippers.
She will slip and fall before anyone else wakes up.
She will yell: “Damn it, who spilled oil on the floor this time?”

those poems are tough and seriously amazing! a blessed tuesday, Sir Albert! thank you for sharing.