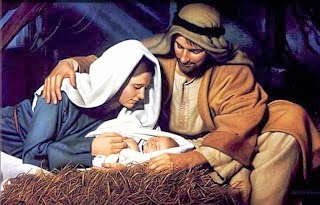 The Manger recalling the Nativity scene in Bethelem was the true symbol of Christmas that no Christmas tree (pine or prefab faux sapling)could replace. These poems recall a time when making it for the holy day was quite an often quietly revered enterprise for the faithful. Those days are gone. Although we have the year-round "belen" in our family room to remind us of the central theme of our faith, we see less of it even in the Christian churches of our congregations. Why?

THE QUIET DISTANCE: TWO POEMS
ON HER CHRISTMAS MANGER

Did you wake up for Noche Buena?*
Lit the balled candle on the belen?*
Do you still put those candles away
for another Pascua de los muertos?*

I can almost see you cranking open
the heavy lid of that narra trunk
at the foot of your bed where his
picture stands sentry while you sleep.

How long did it take you this time
to rearrange the animals around
the manger? Reposition, you’d say
but they’re always in the same place.

The lamb snuggles closest to the box
you stuff with dried grass for hay,
the ass farthest, the horse between.
Why? I would always ask while I,

insolent tot, handed you the wrong
fauna at a time. You would laugh
at how San Jose landed on your palm
when you asked for the donkey, an

angel when you yelled for a shepherd,
a magus when you barked for a burro,
and on and on until you’d pitch me
the hard-packed ball of saved candle

drips from father’s grave on the one
other fiesta you’d get up from sick bed
for---but Noche Buena is a rare treat:
you’d eat pan de sal, a whole banana.

“Para mi fuerza, para mi belen de pascua,”*
you would sheepishly explain an appetite
we plead for each day you’d remember
father building the manger with you long
after he had the last laugh when, like me,
he would give the dingiest animal figure
instead of a king, a shepherd, or an angel,
and simply did not get up from a crumple
laughing at you when you threw him
back the make-believe cow dung, manure
for the grand project of a straw stable
that father said was wrong: it was a hole
in the city of Petra in that Bethlehem hill,
and there were no inns to take Him in.

You buried him with that Belen de Pascua,*
Mother, and could not quite remake one
you would delight describing to a devil’s
detail to polite and knowing neighbours,
who would drop by to gawk at your porch
where the only clay image in its right place
was the baby in the manger whose name
you kept on muttering was father’s name.
On nights like this, I scare myself, Mother,
with the spectre of the quiet distance. 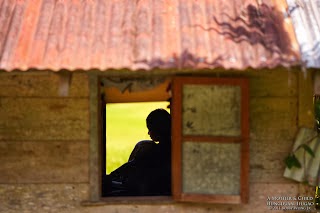