PORCH TALK ON THE APOCALYPSE 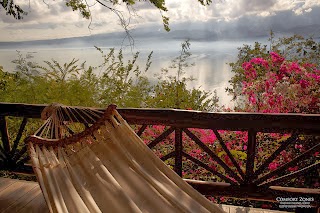 It did not happen in 2012 as the Mayans were said to  have predicted. 2013 came in without the signs and went out with all the signs: polar vortex, global warming, ice storms where they did not happen before, melting down of the ice caps in both poles, volcanic eruptions along the Ring of Fire, storm surges, earthquakes, droughts, famine, wars in all corners of the Earth, random rapes of men/women/little children, mass murders, parents killing children, children killing parents, hue and cry decrying corruption among leaders and citizens, mayhem from above and below, human trafficking, economic strife among nations, economic debacles all over the earth, general man’s inhumanity to man where he is no longer his brother’s keeper, the Seven Gates of Hell described in the Bible’s Revelations all articulated world-wide through even the comeuppance of cyber and digital numbers fraud wrecking the banking and insurance business, all palpable results of the ultimate evil of 666 stirring, anarchy rife through dying democracies, base effrontery and indifference in slander and defamation in media including the Internet’s social media. But haven’t all these disasters been with us before? Superstition? Omens? Ah, but even hints of Armageddon have surfaced: gassing of Syrians (children slain like the Holy Innocents), threat of nuclear wars in Iran, Iraq, Pakistan, India, Libya, Israel, Palestine, even the holiest of places in the birthplace of Christ in Bethlehem (Petra) is not spared human greed and bickering, and the plea for Peace come from the Pope and the United Nations Organization but they remain as voices in the wilderness hoping for a salving Second Coming.  Are these merely “shade of His Hand outstretched caressingly?” Is this Wrath descending/ascending the wrath of a dying planet that has seen its forests burned to the ground, its water sources polluted by toxic substances produced by mining fossilized fuel in the Earth’s core, natural and man-made disaster ad nauseam where we finally see that for every new thing made by man for his comfort, an opposite dismal effect is produced to his disadvantage? Why has man finally put himself into a estoppel where an otherwise finer evolution has been interrupted, thus making him the proverbial homo interruptus? At the risk of being blasphemous and trivial, I offer humor and irony as my defence in an act of quixotic self-defense. Is the sky finally falling? Or have we simply turned into Chicken Little because resistance is futile? We have triggered the Apocalypse prematurely? Is there an antidote to this galloping end that promises both a bang and whimper? Paraphrasing Omar Khayyam, “Ah, Love! Could you and I with Him conspire to make this sorry scheme of things entire, would we not shatter it to bits, and then remold it to our hearts’ desire?”

PORCH TALK ON THE APOCALYPSE

Sun through a skim of clouds. A nuthatch and a downy woodpecker trade anxious, nasal notes between the faint shadows of the trees. ---Dave Bonta, The Morning Porch, 12-13-11, Via Negativa


N:    Think this winter will be our last? Mayan 2012, remember?
W:   Nah, might just be a peep at the God Particle by a savant.
N:    What’s with the peppy, sunshiny, head-in-the-clouds cant?
W:   Been pecking on wood all my life! What’s with the dander?
N:    Not enough nuts or weevils as it is. Why end it all? It’s futile.
W:   Boredom. Renewal. Occupy. He’s hinted these for a while.
N:    Occupy. Uh-oh. Come back to reclaim this neck of the woods?
W:   Final Coming. Like Advent. Last trip, like. He’s tired. Pissed.
N:    Like driving scruffy tenants out for punching holes on walls?
W:   More like ozone layer holes. Global warming, oil spills, Nuts.
N:    They’re already murdering each other. Wars, famine, Woods.
W:   He’s got to have the last say. He wants them to say: We repent!
N:    What’s the point? Couldn’t he consider his love well spent?
W:   Don’t know about you. I would like to bore a few more holes. 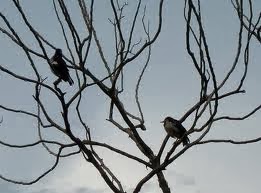