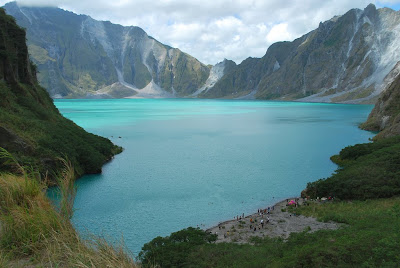 --- It rained at the Grand Anse beach in Grenada.
Writer’s Notebook on the Cruise

Hurriedly, furtively putting on her top piece,
she looked triumphantly nubile coming out
of the make-do change nook of towels held
by her Umberto to hide her from sparse beach
traffic gaze --- gauche stares from a hawker
of fun would have been de rigueur in Rio
when they were young, but she must now
twist and turn to cover a sag-here a bag-there:

She would have wept, but the Viejo beside her,
is once again her swain, coaxing her: Venga!
is all she needed to rush into the lapping waves.
Venga! Queridisima mia! A lass again, halloing
again at the water’s bite: Come, Umberto! Come!

But the mountain cloud bringing the first rain
after a searing summer has overtaken her glee:
Lluvia! Lluvia! She cried, bewailing the sudden
leeward burst. Bolting out of the roiled sea,
no longer Venus-like, she scampered --- her
caballero in tow --- to the thatched shed,
pell-mell shelter from an abrupt summer rain.

Was it the surprise of a wayward downpour
stopped her from her frolic in the sea?
Or was it the intruding pall ruined her mark
of the sun, gone from the sky, gone from the sea?
Lluvia! Lluvia! She warned anyone who cared
to listen --- the beach frolic rolled unabated.

He shrugged as he shook the water off his ears.
Put your clothes on, Edo. The rain won’t stop,
might have been what he wanted to say when
she asked: Why must it rain when all we need
Is a little sunshine? In such a short short while?


(During the first week of April, diluvial floods have wrecked communities in Rio, Brazil, where Umberto and Edo must have gone back to after the cruise. The killer floods and landslides were caused by torrential rains.
Edo’s Lluvia! Lluvia! warning is worth heeding.

In the Philippines, a recent situs for killer floods, (now ironically widespread drought throughout the archipelago) schoolchildren have been taught to chant the English ditty once again: “Rain rain, go away! Come again another day. Little children want to play.” You know, just in case Yahweh understands English only.
The rain becomes a bloody plot. --- ABC)
Posted by ALBERT B. CASUGA at 6:10 PM