POEMS FROM THE BAUL BY JASON MONTANA 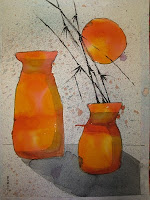 A clearer sky of purpose 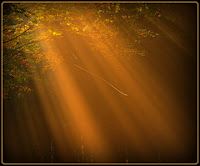 At 5:26 a.m. en punto
Just as the summer
Sun
Began
To release me
Poised
On awakened
Shores and
To breeze and soft
Skylights
Pale orange and silver
Gray fusions
Of my making
Suddenly he came
Undefined unnamed
In the distance
Amazing my mind
Heart spirit awed
This Red Fighter
Standing on water
Gazing at horizon
Meeting
Of ocean and sky
Alone
Gun slung on shoulder
Silent as
The Sierra Madre
Behind him
That birthed him
That owned him
That loved him
Tall and ranging
Blue and confident
Before my
Rise

* Jason Montana is the nom d'guerre of a Filipino Benedictine monk who took to the hills during the Martial Law regime of the military government established by the Philippine government at that time (ca. 1970s).

This blog has published earlier (See April 8, 2009 post) some of his Sierra Madre Poems, some of them bemoaning his disenchantment with the revolution forgotten by the Filipino people in their haste to settle down from the explosion of "people power" that toppled the martial law government.

Bonding celebrates a wedding in the hills, for these things happen there, too --- a balm against loneliness and the heart being a "lonely hunter". Some of these marriages in the bivouacs have been blessed by enduring bonds that even more prominent "returnees" from the hills find it compelling to express pride and gratitude for those bonds that were forged in the heat of war against social injustice and the poverty of the Filipino soul.

Jason Montana remains to be a hawk-like eye watching after God's children, praying, hoping that the People's Revolution will finally find its plenitude in a similar revolution waged ages ago by the Man from Galilee who marched into Israel to "free his people" that they may gain ascendancy over their lives in the City of God.

Jason Montana, like guerrilla poets before him, honour the memories of poets Emmanuel Lacaba,+ Carlos Tayag, Che Guevarra+, Yevgeny Yevtushenko+, Ding Fernandez+,  Jose Burgos+, Mila D. Aguilar, Rita Gadi, Edicio de la Torre and countless others who came down from the hills with their rifles wrapped with sheets and sheets of poetry to last the ages.

We will cherish our own "Sierra Madres" in our lifetime. Mabuhay ka, Ka Jason Montana.
Posted by ALBERT B. CASUGA at 1:37 PM