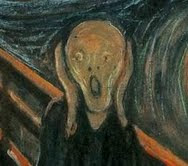 THE WRATH OF DAYS DESCENDING

Last June, Coastal Poems and Asia Writes published my Earth Poems, an unlikely Cassandra of disasters plaguing the planet. In this week's dailies, news about subsequent disasters all over the globe seemed to have validated fears of the true wrath of days descending on man.

The floods in Pakistan, the infernal temperature rise and resultant forest fires in Russia, the floods, fires, and mud slides in China, the temblors in unpredicted points, the outcrop of drug-resistant viruses, microbes, and diseases compounding these disasters were capped by news that the glaciers on Earth's poles are melting and ocean waters are threatening to reclaim terra firma.

I rewrote the Earth Poems to update on these calamities, but I am not laying claim on prophetic powers nor putting one over Nostradamus. I almost want to derive so much wicked delight over the realisation that I could say at this point, "I told you so," but I would rather not. It is not funny, you know.

I clip with this revision the week's disaster news.


(Please click on the image to zoom in on the text and pictures.) 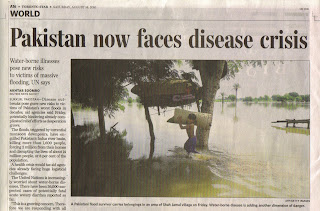 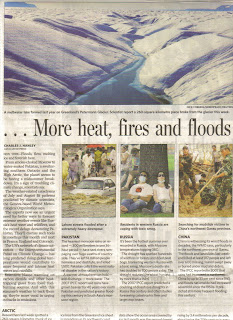 IT’S WHEN I AM WEARY OF CONSIDERATIONS:
(A MOTHER’S WRATH, EARTH POEMS, AND DISASTERS)

It’s when I’m weary of considerations,/ And life is too much like a pathless wood.../ I’d like to get away from earth a while/ And then come back to it and begin over.../...Earth’s the right place for love:/ I don’t know where it’s likely to go better. --- Robert Frost, Birches

If you have lived through these and now blow fanfare
For Earth’s being the right place for love or maybe care,
You might yet begin to accept that Mother’s lullabies were
Also her gnashing of teeth when you wailed through nights
When slumber would have allowed her love not tantrums
Of infants grown now and “quartered in the hands of war”:

How else explain the wrath of days descending
not into quietness but pain? Has she not kept her anger
in check for all the tantrums of the Ages: Thermopylae,
Masada, Ilium, Pompeii? Hiroshima, Auschwitz, Nagasaki?
Stalin’s pogroms? The death chambers and Holocaust trains?
Polpot’s killing fields in Kampuchea? Rwanda’s genocide?

Before it lured tourist trekkers, the verboten Walls of China?
The Berlin Wall? The Gaza Wall? Fences of n.i.m.b.y.
neighbours: India and Pakistan, Iran and Iraq, splintered
Korea, the Irelands shorn of the emerald isles, the fractured
United Kingdom where the sun has finally set on its Empire,
the still haemorrhaging American southern states crippled
and still unyoked from black history but seething now
from the African-American’s irascible entitlement ---

With Zimbabwe’s apartheid, Congo’s rapes, Ethiopia’s
hunger, Sudan’s ceaseless putsch tango, Somalia’s piracy
trade, tribal wars in Uganda, Namibia, Botswana, Kenya,
will blacks overcome someday, soon? Only if they, too,
would get munitions from Venezuela’s bottomless vaults
gurgling with black gold, aceite y petroleo, and Oil of Ages.
Lubricator of the war and killing machines, in Oil we Trust.

Guam gets rattled with its strongest quake yet, sunken atolls
In the Philippines, Indonesia, New Zealand become sea again.
Landslide carnavals in Brazil? Uganda, too? Chile quakes 8.2.
Russia’s galloping inferno will reach Chernobyl in no time.
Radioactive fallouts imminent; its reach unimaginable.
What’s 14 million homeless like in Pakistan’s deluge?
Wait till China registers its numbers after floods, forest fires,
Mud and muck will roll out its carrion in denuded hills
Like stuck-up slaloms sloshing down where snow will soon
Cover all – not grass on knolls – just searing deserts. Gobi.
“An earthquake is expected on the fault lines between Israel
And Palestine”, the breaking news announces another temblor.
Nazareth shrines will be closed to pilgrims. And Jerusalem?
Closed. Gaza? Construction abandoned. Problems solved.
Like the eruption of Mt. Pinatubo drove the Ugly American
From the Philippine’s Clark Base where the legions
Of armed rebels, limp politicos, and clap-infected whores
Could not. Tomorrow, then, the Ring of Fire.

Has it gone any better? Love on this piece of terra incognita?
That’s when Mother shushed you back to sleep,
An impatient rhythm clipping away what should have been
A gently lulling melody from the Song of Ages:
Rock-a-bye, baby on the treetop; when the wind blows,
The cradle will rock. When the bough breaks, the cradle
Will fall; and down will come baby, cradle, and all.
The bough breaks, and you scream. Too late for that.
This is not a dream. The freefall is Mother’s little slip
When she could no longer hold you still, somnolence
Finally taking over, and your cri d’couer, a scream,
For help, for caress, for all the love gone from an empty room.
The cradle falls, she can’t pick it up. Exhausted and utterly
Spent, she mutters in her sleep: Spare the rod, spoil the child.

Tomorrow, if it comes, Mother will prop up --- backaches
Assault her waking days now --- will step into her plimsoll
As she would her dancing pumps, oil-soaked slippers.
She will slip and fall before anyone else wakes up.
She will yell: “Damn it, who spilled oil on the floor this time?”