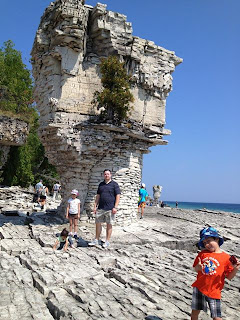 
(For Cloclo, Loulou, and Momo)


1.  At the Flowerpot Island


It was strange while they gawked at it:
A wall fencing the sea in as moat manqué,
Or is it a battle bastion cutting land off
Where the meadows met with the mist
Cloaking this hunting ground at sunrise?


Did cannons roar atop these lime stones
When, in stealth, tall ships sought shelter
From the roaring waterspout howlers,
Leeward wind that kept even the brave
In their teepees and the hunted in lairs?


Are sundown tales of weeping mothers
Clutching their limp, bloodied infants
Slumber stories here, like roaming ghosts
Peeking into tents watching the wee ones
Snuggle deep into a mother’s embrace?


Did the dogs of war prowl these shores
Some time when God, grain, and gold
Were chattel peddled, if not coveted,
By conquering intruders from beyond
Who decreed suns never set in empires?


There is nothing in that crevice or cranny,
Little one, you will not find lost sea shells
Buried there; they have been reclaimed
By the sea, like a mother who will not trust
Anyone who slays children in their sleep.


Elsewhere, while you dream of waterslides
And moonlit beaches, sand caves, sunsets,
And laughter among the dunes of Sauble,
Lads and lasses, mothers and fathers, too,
Shall not wake up to another misty morning.


Before bedtime, after another sundown ,
My wee ones, look long and hard at the sea,
Ask her gently to lend back some sea shells.
You will return with bright flowers in them. 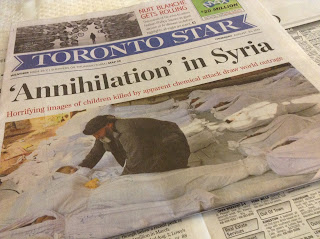