A POEM FOR THE FALL: AUTUMN'S QUESTION

Why do we exist? Why is there something rather than nothing?
--- The question of the ages. 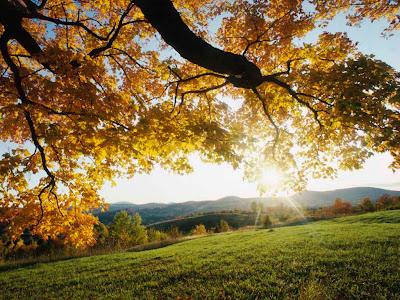 Someone, something, put one over the graffiti Pollocks today:
there’s paint all over the cobbled boulevard, a chiaroscuro
of foliage, a mayhem of hue cutting through dreary treetops,
an assault on the bleakness of a clean well-lighted street,
a rampage of glee gone berserk on a roiled canvas of forest
awash with windswept strokes running riot along walls
of maples and birches and whimpering willows, a cul de sac’s
Sistine vault, Klee’s templegarten, Monet’s pond, aieee.

This fullness of surprise is still our constant wonderment:
what does this arboreal splendour, this arbour’s magic,
change sylvan verdance for? Why the circus of colours
before autumn’s chill crinkles leaves to brittle brown, black,
or even nothing? What temples rise from the deluge of shades,
what language of grandeur echoes in these ancient retreats?
Or what language of absence befuddles before this death
that crumples something to nothing? This fall, we ask again:
Why is there something rather than nothing?

Something, someone, did one over the city’s graffiti lads today:
someone has painted the rainbow on small palms of leaves. 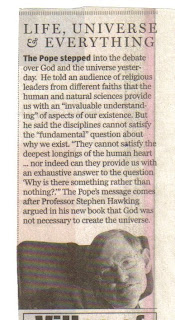 Nobel Laureate and Physicist Stephen Hawking, an emeritus professor visiting Canada's University of Waterloo, came out recently with an obiter dictum that God was not necessary to create the universe. The Pope, speaking to a group of religious leaders in England during his state visit, stepped into the debate and conceded that the human and natural sciences "provide us with an invaluable understanding of aspects of our existence...but the disciplines cannot satisfy the fundamental question about why we exist...nor indeed can they provide us with an exhaustive answer to the question 'Why is there something rather than nothing.' "

The question became the ligne donee of the poem "Autumn's Question" which this writer wrote to welcome the fall with. All the colours of autumn become the central image of the poem that revels in the graffitti-like riot of hues. Is this nature's graffitti? Who is going around painting the arbours with the colours of the rainbow? Why the bravura before the leaves fall and die?
Why is there something rather than nothing? And why must there be nothing before something?
Posted by ALBERT B. CASUGA at 6:07 PM

"...someone has painted the rainbow on small palms of leaves..."digs so much

Your Autumn poem is magnificent, making me wonder more about autumn in many places

That book, by that scientist === i haven't read yet --- but as they advertise their genius, maybe their only into press release, maybe

let us pray for them - that might confuse others

thanks for being a poet for us

i miss you sir

may GOD bless you and your works,
rose