In the Weekend Post section of the National Post, book critic Mark Medley listed Miguel Syjuco's Ilustrado as a contender for literary honours in Canada:

"This year's literary-awards season begins in earnest on Monday (September 20), when the longlist for the Sociatabank Giller Prize, as it is now known, is revealed. This will be followed closely by the announcement of the finalists for the Rogers Writers' Trust Fiction Prize and the shortlist for the Govenror General's Literary Award. These Big Three fiction prizes will all be awarded in November. . . .

"These days, at book launches and publishing parties, when talk turns (as it inevitably does) to which novels should be nominated for the major prizes, these are the books I mention (in order of their illustrations at right):"


(Please click on the images to zoom in on the text) 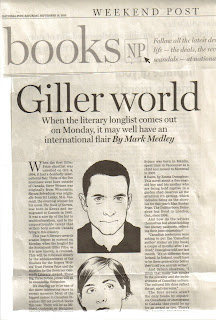 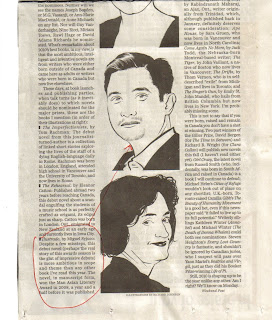 Syjuco was born in Manila, the Philippines, grew up in Vancouver, and now lives in Montreal where he works for the Montreal Gazette.
(This blog's earlier post on his impressive debut novel traces the interest in Syjuco's work where his Ilustrado is considered a phenomenon in the literary world,  having won the 2008 Man Asian Literary Award and the Philippines Palanca Award  (2009) while it was still in an unpublished manuscript form.)

Medley quotes Syjuco as observing, (the writer himself holding two literary passports, reflecting his joint citizenship), "I think that really just speaks to the plurality and the inclusiveness of Canadian culture. The cultural life does reflect the art, and vice versa."
Come Monday, a longlist or shortlist for Syjuco, is achievement enough. Garnering any of the Big Three  prizes would indeed by a literary phenomenon. And he is a strong contender.
Bon chance, Miguelito! We are proud of you. See you in November.
Posted by ALBERT B. CASUGA at 5:35 PM

Keep up the excellent work, osg777 I read few articles on this site and I think that your web blog is real interesting and Power to the People of excellent information.