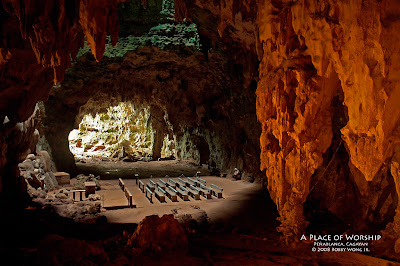 A Place of Worship, a Photo by Bobby Wong

A PLACE OF PRAYER*

What temples rise from the deluge of shades,/ what language of grandeur echo in these ancient retreats?/ Or what language of absence befuddles before this death/ that crumples something to nothing?/ Why is there something rather than nothing?
--- From Autumn's Question

Cold and rough hewn pews align the red clay floor
where rifles had lain inert and at stock most dawns
when bloodcurdling screams of combat gave way
to hard-earned slumber and  crackle of campfire
in tempo with the rhythm of breath heard where life
might still have lingered among the beds carved
from crevices where crag flowers have bloomed
before nightmares came with the fall of sparrows:
this night’s sleep would be tomorrow’s horror.

But daybreak brought instead a temple’s prayer:
Upon this cave, our people will build their church.

Why an "unfinished poem"? There is a "cathedral" of images left unlimned in the caverns of this place of worship. Borrowing from the practice of "ekphrasis", this composition links the image to "echoes" beyond the picture. These may proceed from the picture's history or from the poet's extension of the images that could exude from the image that vibrates with layers of mnenomic associations.

This blog invites poets to finish the poem's narrative with related images to create a "harder" gestalt, a poetic plenitude, as it were. Feel free to send in collateral tropes or other poems "induced" from the pregnant picture.

A blog  (Poet's Picturebox) maintained by Filipino poet Marnie Kilates solicits this type of poetry from pictures. While it is an inverse version of poems that create pictures from words, "ekphrasis" is an old technique of using an existing visual image as the ligne donne (given line) or springboard of poetic creation. It has always been a resourceful tool for poets, particularly Oriental.
Posted by ALBERT B. CASUGA at 8:09 AM