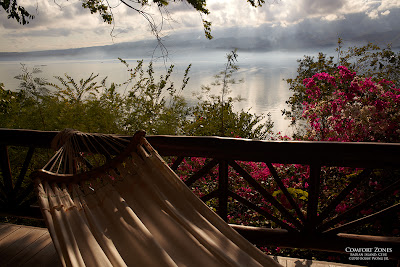 It is the Sea eats limb so life (so love)/ may not to its eternal wanting finish/ what it late started must soon deny:/ a clown’s journey through a circle’s shadow. . .

Another fishing season would have gone
by sundown, but I have stopped counting
and stopped fishing, too; think of all the bass
that got away and the crayfish dried brittle
on rocks laved clean of seaweed and brine,
ebb tide marking rhythm and time when
breaking waves drown the homeward hallos
of fishermen pulling empty nets and ruined
mesh dragged off by catamarans whose relics
now jag brackish breakwater rocks when
low tide retrieves stray shells wrapped in flotsam.

Echoes of your shrill shrieks and laughter startle
me still when I cock my ear to catch them
filling rooms and spaces that I would have shared
with you if you had only given me the chance
to teach you how to fish. But you left without
saying goodbye. At sundown, though,
on my hammock hour, I still hum your lullaby.

On October 2, Julian Ashley  Casuga-Dela Rosa, my first grandchld,  would have been 26, but he succumbed to sudden infant death syndrome four months after his birth.

I wrote an earlier poem marking his passing, "For the Grandson Who Did Not Choose to Stay", which I reprint together with the new poem above in his durable memory. O, how we could have gone away fishing, had he stayed longer. Con amor duradero, hijo mio.


(Please click on the image to zoom in on the text.) 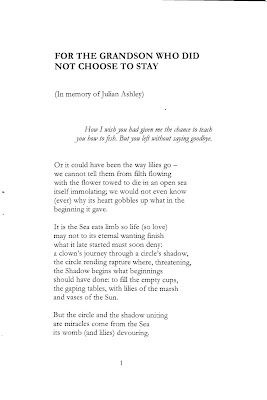 What a stunning, touching poem. So sorry for this loss, but happy about the remembrance.