A COVENANT PROMISED ON A RAINBOW: FOUR QUARTETS 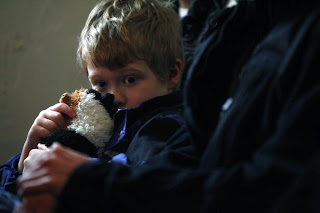 A COVENANT PROMISED ON A RAINBOW: FOUR QUARTETS


(For the Children of Newtown, Connecticut)

Except the empty tea cup on his littered writing table,
“This is too senseless to be silent about or to be brave
about, no face of courage can take this! I won’t!”


He will break his promise to meet every gory mayhem
Slaughtering children with the silence and stillness
His father said was the surest manner of disarming
Even a juramentado, a deranged reaper for Allah.


Killing for one’s god is a talisman that will not work
With silence, but this was a young boy mowing down
Frenziedly scared toddlers hardly weaned off pacifiers.
“Personality disorder,” the dumbstricken explain away.


Exposure to a culture of violence, the one that inures
Even the brightest lads and giggling lasses to the gore
Of war and murder most foul, savants of madness say,
Their wrists limp on tall tumblers of champagne. 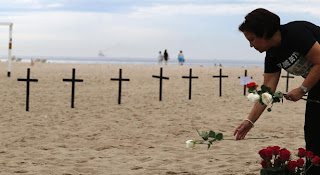 2.
He stared at the  horrified faces of puling children

Beelined to a sanctum, rushing armed men skipping
To the rhythm of combat, teachers-mother-hen-like
Clucking for their wards, wailing tots, under tables.


The idiot box manages to capture purely idiotic,
Inhumanly stupid caterwauling of pundits, governors,
And every common barber shop jerk crying for a lynch,
Begging for a posse of armed mothers and fathers.


But the geek with a mushroom head will not give them
The pleasure of the hunt. He killed a score of innocents
Much like the disembowling of holy innocents of yore
Ordered by an insane bastard out to slay a rumored


Messiah, one born in the cradle of wealth, an heir
To a King David whose throne will outlast all rulers
Who seat on clay or rotten stubbs, and offed himself.
Could he have guessed, instead  one born in a stable?


A sovereign on a donkey trotting to the hisses
Of eunuched holy men when his time came to fulfill
The raves of the man yammering about a man-god
Come to restore a paradise? His head ended up on a platter.

3.
He, only he, will be able to sleep well tonight, all nights,

Even; he knows these abattoir of butchers in a posh,
Clean and well-lit postcard village, these cold slicing
Of throats in all the war zones of a beleaguered planet,


The ovens of syphillitic Hitler, the daily dose of infanticide,
Mothers strangling their listless children in bathtubs,
Fathers killing all their trailer-sheltered encumbrances
To spite the hell out of cuckolding wives, Adam Lanza, 21,


Blasting his mother’s head off---a rehearsal as a prelude
To the slaughter of the Connecticut innocents, suicides
Of love-starved ingénues clutching Facebook taunts
Of naked pictures and faceless phalluses. He knows. 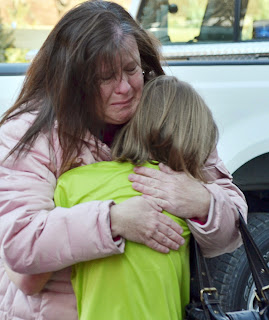 4.
And he will, after today’s silent scream, meet all disasters

With stoic silence and stillness, because they are cries
In the Wilderness, not far from the edge of these woods,
That a Second Coming is ripe. He needs to hoard all


This anger, this unyielding hatred, this wordless suffering
As starkly honest as the whines of a copycat Job, will be
Transformed into the purest of Love, the one weapon left
To smite all who mock the descended avenger with his sword,


His terrible swift sword, wielded with light born of the one
Love that shall tie all into unity again, body into spirit,
The essential joy of soaring with the godhead reigning
Forever with the many who have melded into One.


E pluribus unum. His body is ours, His blood runs through us.
At last, he will recognize from the throne of his little porch
How men shall all be part of a cathedral of thought, of Love,
An unbreakable Unity full of silence and stillness brought
By Him/Her in a long-expected covenant promised on a rainbow.
---ALBERT B. CASUGA
Mississauga, December 15, 2012 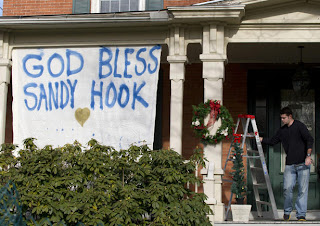