A GHAZAL ON THE VOW WRITTEN ON A RAINBOW 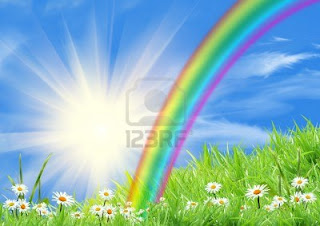 A GHAZAL ON THE VOW WRITTEN ON A RAINBOW


Simeon, look at the sky, its script of rain/Is part of it somehow, the Christmas vow.--- Simeon Dumdum Jr., A Ghazal for my Friends at Christmas.


At sundown, when the sun sets, the Christmas vow
Is clear on the script of rain---a covenant of rainbow.


Après Le Deluge, it was not the vulture sent down
To mark the end of the covenant on the rainbow.


The dove brings the rain script down from an ark
Now stuck on an Ararat of some promised rainbow.


It will be gone before it comes, the curse of living
Without the meaning behind the façade of a rainbow.


There will come from the wilderness of spite taking
Shape in the indigo of that covenant on the rainbow,


Dark, murky, unclean in the cerulean pad of the sky,
An arch with warm colours as vowed by that rainbow.


I shall be with you until the consummation of colour
Upon the stark promise of that convenant rainbow:


You are with me until the dying of returning swallows,
But how much have we pledged instead on a rainbow


In this stormy weather, in the expanse of a blue sky?
To bring us all to the house of the covenant rainbow,


The Child warmed by the donkey’s feed in Bethlehem
Will be our promise indelibly inked on that rainbow.


He will still be there holding the hues of the covenant
with you, forever and forever, at the end of the rainbow. 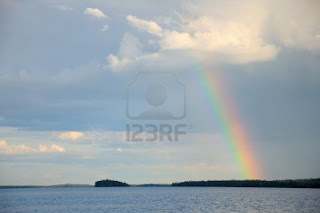