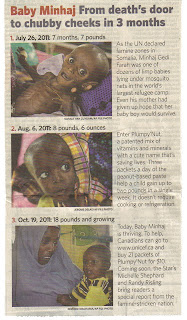 (Click on image to zoom in on Text)
SOMALIA’S BETHLEHEM

Sometime in the gloom of this dread, a hill
of burning sand replaces the stable manger,
and Somalia’s desert becomes a new world’s
Bethlehem. In its famine zones, a limp baby
struggles to stay alive. Minhaj Gedi Farah,
starves under a mosquito net in the world’s
largest refugee camp, “even his mother
has given up hope that her baby boy, Minhaj,
would survive,” reports the Associated Press.


But magi and shepherds alike did not need a star
to lead them back to his tent. No gold, no myrrh,
nor incense gifted, just a mix of Plumpy’Nut,
AP calls a “cute name for vitamins and minerals
saving Minhaj. Three packets a day of the peanut-
based paste help a child gain up to two pounds
in a single week. It doesn’t require cooking or
refrigeration...Today, Baby Minhaj is thriving,
growing from seven lbs. in July to 18 pounds
in October, 2011.”


And our world will not give up, on all
that is innocent. Not this boy, not all Earth’s
boys. No massacre will cut them down again,
nor troops to slay them in brutal Kenya camps.
There will be time enough for a Calvary, but not now,
nor Minhaj need be a redeemer. Mankind in his tent
will not be taxed for the sturdiest crucifying lumber,
all they need are 21 packets of Plumpy’Nut at $10,
and a deluge of epiphany: they are this brother’s keeper.