CHRISTMAS AND HUMAN RIGHTS: CAN CHRISTMAS ALSO BE FOR THE POOR?

Amidst the frenzied flurry of Gift-buying, we offer the following to form part of the sobering "conscience" for the season.

Carol Goar's Toronto Star column and Juan L Mercado's Philippine Inquirer column are pundits' views we could not do without on Christmas day and the days to come. 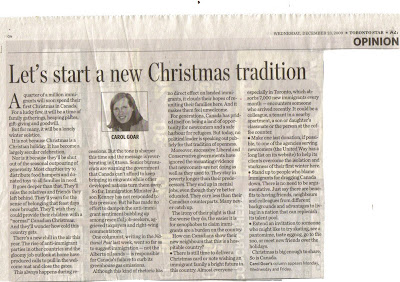 Philippine and internationally recognized, award-winning journalist Johnny Mercado sent us a copy of his Chistmas eve column at that country's Philippine Inquirer, and we are gratefully publishing it as part of our monitoring of human rights and issues affecting the human condition which could no longer be ignored --- holiday, holy days, or some such celebrations notwithstanding.
If Christmas is not the one sterling chance for human rights to be focused, since "it is the season for giving," I do not know any better time.
It is also apropos to think in terms of "traditions" we could adapt during this Christian Holy Day which has been secularized by global trade and the almighty dollar. We publish in tandem Toronto Star's column Carol Goar, since Mercado and Goar talk about human rights that are overlooked, but revisited every so often on Christmas time.
If for no other reason but to re-focus human attention on the meaning of this Christian holiday, pundits would always find this issue a good material to write on.
Here then is Mercado's column, and click on Goar's column to zoom on the text.

THE LADY SWADDLED IN HAND-ME-DOWNS
by Juan L. Mercado
The Philippine Inquirer , 24 Dec 2009

At the Redemptorist church door, the beggar lifted up her infant, swaddled in a thin sheet, as the wife and I passed by. Misa de Gallo ended earlier. “He’s two weeks old,” she said.

What was her name again, this lady in faded hand-me-downs? She shared rice packets that the wife brought periodically. Without fail, she’d trudge back to say: Salamat. (Thank you.) The other 31 would vamoose without a word

The ancient text, meanwhile, echoed in our minds: “She wrapped her child in swaddling clothes, and laid him in a manger, because there was no room for them at the inn.”

What is the future for this mother and child?

The most fractured human right here is that of an infant to celebrate his first birthday. Infant death rates have dipped to 20 per thousand live births. That improves the 35 deaths tally in 1997. But that’s far behind Malaysia’s 10.

This kid and her mother are the faces of over 4.7 million households locked into a penury-hunger treadmill.

In “Poverty in the Philippines”, Asian Development Bank notes: “Hunger has now been at double digits for more than four years since June…: Poverty reduction has been much slower than in neighbouring countries like China, Indonesia, Thailand and Vietnam.”

The elite get access to health services. But only three out of ten, among the poorest, will be as lucky. Less than 55 percent of the poorest get thru primary grades. Will this kid ever read “Hamlet”? "That season comes wherein our Saviour's birth is celebrated / The bird of dawning singeth all night long"

Can this infant survive the thievery to become a five year old?.

Many don’t. Death among children, aged under five years, today stands at 33 per 1,000 births—down from 40 per thousand in 2003. At the UN Millennium Development conference, we pledged to whittle that down to 18 deaths by 2015.

We’ll flub that pledge, given how slow reforms have shaped up. Mindanao was this country’s “breadbasket.” Today, more than half of the 20 poorest provinces are from Mindanao. The “proportion of families experiencing hunger is now highest in Mindanao”

“Hunger is a wanderer.” Thus, migrants stream towards better off provinces. They swap rural indigence for urban poverty. The five provinces today with the largest number of impoverished people are: Negros Occidental, Cebu, National Capital Region, Pangasinan and Leyte.

Chronic hunger opens doors for disease. It narrows options, for this mother and child, just as it did for a pauper we met in 1982.

The grime-streaked beggar, at the Redemptorist church door, wouldn’t budge. Mass had ended. If delayed, I'd miss that overbooked flight for Bangkok. As a "martial law refugee", Thailand was my UN duty station for 17 years. Four of the five kids were flying in from US schools for Christmas.

"Don't you remember me?” the beggar persisted. Seeing the blank look in my eyes, he murmured: "We were classmates in elementary grades. I am Candido….."

Memory scraped away the wrinkles, the dirt and in-between years. We played patintiro and other games of childhood. Together, we built model airplanes and sailed toy boats. Vacations, we'd swim in nearby pools.

Tiene cara de hambre. "You have the face of hunger," the orphan boy tells the Crucified in the film classic: “Marcelino, Pan y Vino.”

We managed snatches of conversation. Airline schedules are unyielding. Couldn't I have dropped, into his tin cup, more than what was hurriedly fished out of a shirt pocket? I fretted even as the immigration officer waved us on.

We're all invited to journey to Bethlehem.

For some, like Imelda Marcos, the invitation comes, as the Guardian of London notes, while she “clicks a button for servants in a Manila penthouse cluttered with masterpieces by Picasso, Michelangelo, Gaugin, and priceless antique statues of Buddha and gold, gold, gold.”

Others, like my beggared-classmate and lady in hand-me down, with child, wearily limp to "the City of David" with empty tin cans. Billionaires here lodge in "gated enclaves" while many lack frugal livelihoods.

Yet, "Christmas is the only time I know of when men and women seem, by one consent, to open their shut-up hearts freely," Charles Dickens wrote in 1843. Like the re-engineered Ebenezer Scrooge, they "think of people below them, not as another race of creatures bound on other journeys, but as fellow passengers to the grave."

There is, we're told, geography of the heart. Like the Magi, we travel its byways, not merely from place to place, but from grace to grace. It is a search for what endures amid the transient. Without fail, we find it in those with cara de hambre.

"They found the Child with Mary his mother," the story goes. Venite adoremus.

E-mail: juanlmercado@gmail.com
Posted by ALBERT B. CASUGA at 5:48 PM