I LEFT MY SANGFROID IN SAINT LUCIA, (THE CARIBBEAN ISLAND), AND A GUIDE CALLED SPENCER

We're back. But I left my sangfroid in Saint Lucia.

(St. Lucia's twin peaks, Piton Gross and Piton Petite. And that stretch of blue? That's the sea, the sounding sea. And the sky. And sunshine. Our meteorologists here say the nasty storm that buried Washington on our way back home, is scheduled to give us either a White Christmas or a Wet, freezing rain, Green Christmas. And nasty cold cold windy days.

That's why I left my sangfroid in St. Lucia) 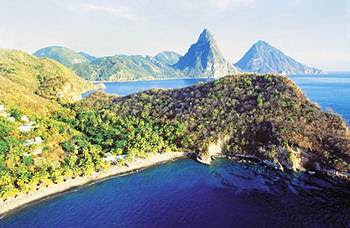 "How are you feeling today, Du du?"

That's St. Lucia Creole for darling. The French patois serves me well these mornings (coming back from the restful and pined-for-again-and-again break in that Caribbean Island) -- it brings a smile on the love-goddess's lips and a crack of laughter worth a million these days. After that last-minute frenzied shopping yesterday for the traditional stocking-stuffers (from THE GRAMPS), she would not, could not be in the best of humour. Two days left.

But there it is: "Good morning to you, Du du. I trust your aches and pains have not come back yet?" What a come back.

If there was anything I came back with worth all that touristic expense, it should be this word: Du du.

No! Not that kind of American doo-doo from man's best beast-friend, poochie, biggie, chi-hua-hua or whathaveyou. That's how Spencer, our private tour guide, hastened to allay our scatological fears should we choose to include that in our now almost-cosmopolitan vocabulary.

No, not merde, nor mierda, nor dog pooh, he said, facile in the languages left as colonial residue in St. Lucia (found by storm-aided accident by Spanish galleon traders, coveted and wrested away by French tripolantes, and finally annexed by the British armada for the Queen of the Empire that knew no sunset, until the modern St. Lucian politicians declared independence in 1979, and offered this sunset to the British colonial rule.).

"It sounds like the French slang Do-do" ( that we use to put our Francophone nieto y nieta to their noon-time, after-lunch nap. ) French siesta.

Then he guided us through Soufriere, a rainforest country town about a 20-minute roller-coaster ride from our Coconut Bay Resort and Spa (former Club Med, which was bought by an undisclosed Jamaican tai pan (Chinese for rich man). Yes, that kind of cosmopolitan, I warned you.

He brought us to the place where that rotten-egg smell was coming from.

"Mon Dieu, signeur, I did not blow wind, I promise you," he protested in the Lexus he drove us in. This in response to a farting -- Philippine-Commonwealth-President-Manuel-Quezonian pointing-of-finger-escape-and-save-the-president-from-eternal-shame-gambit at his secretary -- "Punieta, Nieto (Primary Secretary Manuel Nieto)"-- query ("What is THAT smell, Spencer?")

That was the sulphur-steam emitting volcano crater which is why the place is called Soufriere (creole for sulphur here -- "sulfur ici").

"How on earth can that St. Lucian rich man with a mansion astride the crater ridges stand this," I asked Spencer incredulously.

"He is an absentee landowner-cum-homeowner. A foreigner. American probably. Or a celebrity like Ophra Winfrey who built her mansion between the twin peaks Gross Piton and Petite Piton (Big bear and small bear), and proclaimed Saint Lucia and the Piton peaks and its Atlantic-gulf beaches as the "best place out of the ten best places on earth."

Spencer is the epitome of the enterprising Saint Lucian who chuckles through most of his colonial-laden past, preferring to speak creole patois when confronted by a Brit with a stentorian demand for directions or a French-nasal twang or German-guttural grunt for Piton beer from a roadhouse along the way (Spencer said, there is a bar in every house along the way to the tourist areas; secondary income, eh wot? -- besides, while he understands their street-speak, they in turn will always think his creole patois is "interestingly exotic" even when he is calling them names or just "jerking" them around. Classic defence mechanism and vengeful tomfoolery for the freed colonial, for you.)

In that half-day tour, our St. Lucian 25-mile-an-hour driver-guide has pointed to flora and fauna that is so redolent of the disappearing tropical rainforests of the old country. Instead of goats grazing on the turf, though, there were lambs ready for the cauldron baa-baaing their last gasps away from underneath the concrete-stilted roadside bungalows that hid backyard stilts supporting them from unforgiving ravines that could crumble during any old landslide (except that would not happen here, because there are stones buttressing clay ravines, stone quarries, and all types of bamboo trees, mango trees, sturdy brambles, buenavista plants, bandera Espanola flowering shrubs, coffee trees, cinnamon trees, cacao trees, fire trees (the arbol de fuego -- fire trees along Roxas boulevard in the Old Manila), O, God's orchard really, where any type of plant or weed could grow quickly because of the nourishing early morning and late-evening rains, and astoundingly-bright sunshine through out the day.

Spencer was not afraid to ask us "if we knew how to pray" when he negotiated the mountain-side alleys up to Jade Mountain (a fantasy resort-spa where clients are ferried from the sea and up by helicopter to sanctuaries (not suites, please) that sported their own pools that flowed out into an infinite vista of the sea, and a stellar view of the skies at night where "one can almost touch God, or at least his outstretched fingers" while meditating and lazing about serenely because there are no televisions here, no internet connections, no computers, nothing to suggest there is a job to go back to after this week or at least a $1700-a-night stay, with all the amenities of a 5-star hotel.)

Nor was this young father of two -- who did not look like his 30-years -- afraid to bring us to a roadhouse where one could order barbecued chicken or pork-to-end all barbeques and munch on them by the marina (my Du-du thought the food on this roadside honky-tonk was a lot better than the all-inclusive resort we were quartered in -- same food day-in-day-out, even in the reserve-only Italian and Asian restaurants they maintained -- nothing adventurous in cuisine. Or they may be afraid of sushi or sashimi -- this island of teeming sea life, because raw fish may not settle well with those American clientele. Or you could take that hour-ride to Rodney Bay up north to eat in those Japanese-theme restaurants which do not employ Nippon chefs.

St. Lucia as a tourist haven is still a colony of the French, British, and Spanish. Sorry, their Prime Minister, a namesake of the horror-novel author Stephen King (PM Stepehnson King, esq.) could not imagine a horror-filled tourist industry that will not be supported by its former colonizers. Pity.

Come Christmas eve, we can gorge ourselves with our traditional family feasts; we did not see any poor or malnourished children or homeless citizens in St. Lucia. No guilty conscience. I pray.

While I brought home our treasured "Du-du" term of endearment, I must have left my sangfroid in that sunshine place of the deities, because now I am grumpy and feeling all the aches and pains of an ageing senior citizen, where I did not have a single headache, backache, or heartache in St. Lucia (or as the French colonizers still call her: La Belle Helene).

You know, like the Quebeckers still call their Quebec "La Belle Provence". Well, Ontario is still the province of the Hog Town called Toronto, and French-manque City of Ottawa, seats of provincial and federal Parliaments respectively. A tale of two colonizers struggling to exist in multicultural, diverse Canada.

We are back, indeed. But I left my sangfroid in Saint Lucia. Above the blue...and endless skies...

(St. Lucia sunset is a staple at Jade Mountain [a sanctuary resort], where serene lazing could be interrupted by an arresting bravura of colours rivalled only by a sunset in Manila Bay, the Philippines.) 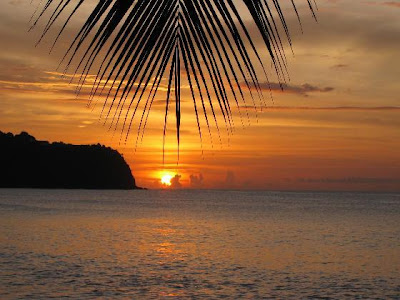 My Du du is now looking at a Cruise on the Oasis (the largest cruise ship in the world, complete with its sand beaches, pools, spas, casinos, restaurants galore. The only damper is that the next openings will probably be in late 2010 or mid 2011.)