THERE IS STILL NO ROOM AT THE INN: CHRISTMAS IS FOR GOD'S CHILDREN 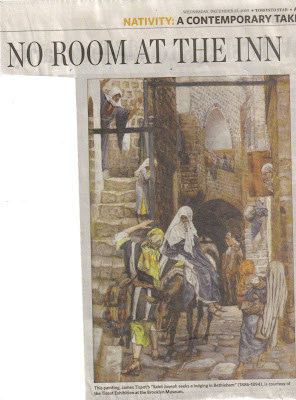 The Toronto Star’s star columnist --- sports, warzones, courts, trends, life, living, death, the lot of intriguing human condition (you name it, she’s written about it ) --- Rosie Dimanno (Star, Wednesday, December 23, pg. 3) did not need to use The Holy Innocents archetype to mark what this Christian Holiday is for.
Christmas is for children, as the Son of God and the son of Man came to us as a Child who survived hypothermia in a freezing manger so that all children might live in the warmth of love, hope, faith, and gleeful wonderment at the splendour of the universe which is his realm, his habitat, his eternal reserve. All the earth is for His children.
There is still no room at the inn. Not for Jesus of Nazareth. Not for God’s children.
“There have been so many acts of staggering, abominable cruelty committed against children that I often despair for the human species,” she said in her Page 2 column. To this day, she still shudders to look at grainy security camera images of Liverpool’s 2-year old James Bulger who trustingly held the hand of a 10-year old lad who police said would later beat the little boy to death using bricks, stones, and iron bar. A wizened journalist, who has seen the horrors of war and the murderous mayhem of humans, Ms. Dimaano still weeps.
“...Disastrous harm comes to youngsters at the hands of people they trust most --- parents, step-parents, guardians, the adults they can’t escape, individuals morally and legally responsible for a child’s welfare,” Dimaano laments.
But today, the eve of Christmas:
“Today, in a Brazilian hospital, a 2-year-old toddler is scheduled for a second round of surgery to remove more of the 5-cm-long sewing needles allegedly plunged into his little body by his stepfather, while the man’s current lover held the child down. Needles were detected in the boy’s spine and abdomen. An operation last week removed four life-threatening needles from around his heart and in his lungs.
”Original reports said the needles had been inserted over a month, perhaps as part of a bizarre black magic ritual, urged by the lover while in episodic ‘trances.’
“But this past weekend, in an interview with Brazilian TV from prison, the stepfather said he’d inflicted this torture on the toddler --- anaesthetizing him first with wine --- as revenge against the child’s mother. She took the boy to hospital when he complained of pain. Doctors estimate the youngster had 38 needles embedded in his body.
“It was truly an unbearable suffering,” the stepfather is quoted as admitting.”
Suffer not the little children to come unto me, for they are truly what the Kingdom of God is made of, the holy book tells us.
Jesus was crucified for advocating human rights for the meek, the poor, and the defenceless, and for inviting followers to recognize that there is one abiding kingdom and authority – not of the empire, but of the Empire of God, where all men are created equal.
But the Crucifixion comes as a culmination of some three decades of rebellion against a social order that subverted human dignity and ascendancy over oppression and manipulative governance.
For Bulger in 1993 and this Brazilian boy in 2009 --- why would their brief, brief life also be their Calvary?
Christ is in the manger, with Bulger and the Brazilian boy “tortured” with the devious needles. Some 2000 years ago, there was no room in the Inn for this Galilean who was unceremoniously born during a tax-census decreed by the empire. There is still no room at the inn for these innocents.
Christ preached forgiveness for all the “fallen” who know not what they do. This crime demands the Second Coming to happen soonest. It cries for punishment to the heavens.
I look at the faces of my grandchildren, and I humbly accept: His Will be done.
On Christmas day, I ask difficult questions about these crimes against the innocent. I pray that they would be answered. I am full of anger. But the intensity of this irascible emotion could never match that of its opposite “concupiscible emotion that leads toward the good at all times” ---- love --- for all these little faces bidding me a blessed and happy Christmas.

***
Our little home has been devoid for some time now of all the irrelevant buntings those yesteryears held as symbols of Christmas.
A priest in our parish once asked us to bring Christ back to Christmas by leaving that Child in the Manger symbol on top of the living room table the whole year-round. No Christmas trees. No bells, no expensive buntings from our commercial geniuses. It is not Rudolf’s day; not Santa’s day; not Yuletide Carols. No White Christmas. No Blue, blue Christmas.
It is the Day that Jesus Christ was born to save man from his unstinting, inexorable foolishness. The Child in the Manger (in our language, “Belen”) is the palpable reminder for humility, the Christian’s primary virtue.
At this writing, we have received and adorned our door with the best gift from our parish priest, Joseph Grima of Saint Francis of Assisi parish --- a small wooden carving from Jerusalem showing the Child with Joseph and Mary in the Bethlehem barn. Atop the carving, I appended a little star engraved for all St. Ignatius of Loyola graduates (one of my schools when I served as a Trustee of the Catholic School Board) with the words: “I Make a Difference.”
What a difference Jesus Christ made.
If only there is a room in our inns for Him, the one they called Emmanuel.