Sharing a brotherhood not only in spirit but most importantly in poetry, Rev. Fr. Francisco R. Albano and I have had numerous exchanges through the years, and I am delighted to share these Christmas Poems he sent me in 2007 while he served in the Ilagan Diocese in Isabela, Northern Philippines.

Through the eyes and heart of Philippine poet Francisco R. Albano, let me extend my Christmas greetings to one and all. God bless. 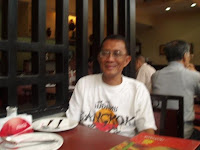 Let midnight in
Starlight moonlight and lamplight
Sunlight and mindlight

Let nothing be
Open bone flesh and blood

Before names and labels
Open Mind

Open nothing
Frameless all

That He may enter
Word made Flesh
Be

Claim this night,
The silent night, holy night of Christmas that pierces through
The noisy night, unholy night of Empire.
The night of Empire is darkness of capitalist globalization;
Its voice, the loud lies of big business, the jingles of its ads,
Fascist bombs and the shrieks of torture in prison camps.
Its night of unholiness envelops factories and slums and war-torn countries;
Denuded forests and unfriendly genetically modified farms;
Hungry children and refugees and the unemployed;
The sick and the lonely; you and me.

The silent night, holy night of Christmas breaks through the night of Empire
And births light from light for us to see:
A Mother fascinated by new-born revelation cradled in her arms;
And a donkey of burden playfully displaying its profile for the Child of promise.
The night frames hope and joy for eyes long violated by imperialist media.
The deep silence sounds the song of Word-made-flesh
And Woman’s heartbeat of life and love.
The night is a placard of prophetic protest and good news of future.
Enter the glow. Will it so.
Claim this night.


When the desaparecidos
Are no longer just individuals
But crowds of protest;
When villages are razed to the ground
And communities are scattered to the winds,
And the ruling classes boast and jeer;
When the heart falters
In dark forests of fascist violence,
The tendency of the rates of profit to fall
Merely consoles the mind;
Lends fleeting sparkle to the sky. It is
A hobbled horse unable to carry the load.
In the year of Caesar
One seeks not only light but also a clearing,
Even if just a dewdrop of morning
But filled with a world and a face.
In this season of unrest and discontent
Grow strong on great stories of earth and sky
Recovered from the enemy:
Of collectives formed from underestimated
Forces of peasants and workers and allies,
Of martyrs reborn in the tide
Of new comrades of hill and plain.
And recall in song
The flower of Jesse in the harsh desert,
The barren and the virgin heavy with life,
Cold stars transformed into angelic hosts,
A magus lost but still on hand
For God broken and Man open.


Slay Zacharias, kill the buddha on the road!
Go beyond heart-heart relations,
Go beyond mind-mind bonding,
Go for spirit-spirit-Spirit communion,
And in your silence of time and space
Be led by a guardian angel of your name
Into your temple of decentered prayer
Devoid of altar and candles and incense.
Simply stand present before the Mystery
Of the Word-Made-Flesh and wonder how
Is it a Child resolves the contradictions
Between the shadow of who we are not
And the light of who we are -- in the past,
The present and future of his becoming.


Quickly now, the fullness of time.
Let us consecrate ourselves
To one another and to peoples of the world
In struggles for justice and peace:
Pronounce the Word over our
Broken bodies and lifeblood violated:
This is my Bread given up for you;
This is my Wine of covenant with you:
That we may become Bethlehems
Where He would be born;
That we may become His jars of sacred drink
Gladdening the hearts of heaven and earth.
The spirits of doubt and cynicism draw back,
So hallowed and so gracious is His time.


Think of it this way:
Though the revolution be at an ebb,
The lighthouse is well tended.
The shore flows to the sea.

In the middle of the dark ocean
There is a vision
Of stars and moon descending,
Heaven seeping into the earth.

And there be people declaring
That the spirit shall prevail,
The forces of history work unto good.
There be music and poetry.

In ebbtime was a Child of Promise
Born. And Herod was sore afraid.

GOD OF THE OTHER, THE OTHER OF GOD
A footnote to Emmanuel Levinas
(12January06—25December95)

May the Word-Made-Flesh, Light and Life of the world be yours and mine -- that we may be his Flesh become his word of justice, love and peace. That we may bring light and life to dark times and places of heart, mind and spirit. That we may enable people to care for one another and for the earth. That in all things God may be glorified.


Next: Fr. Albano just sent me at this writing a Philosophico-Theological Reflection on Human Rights which I plan to publish in this blog.

The issue of Human Rights is critical not only in the Philippines at this time when journalists and civilians alike are being killed in political vendettas but also throughout the world. -- A. B. Casuga

Nice poems :)I enjoyed them :)

Rev, thank you for sharing christmas poems that touches the heart. Im so glad i discovered your website while browsing for poems to share on pinterest.

why do we celebrate thanksgiving