A THEORY OF ECHOES AND OTHER POEMS: A 2009 COLLECTION OF POEMS 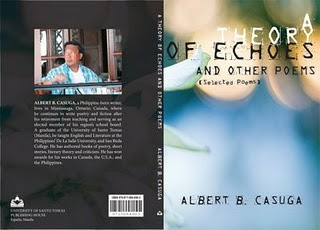 A THEORY OF ECHOES AND OTHER POEMS

Posted here for a wider circulation, A Theory of Echoes and Other Poems was published by the University of Santo Tomas Publishing House, Manila, Philippines, in February 2009 as part of the 400 books written by university alumni to commemorate the university's 400th anniversary. University of Santo Tomas is one of the world's oldest universities (established in 1611) and was at one time under the aegis of the Papacy as Royal and Pontifical University of Saint Thomas. It is now run fully by Filipino Dominican friars for more than 50,000 scholars from the country and internationally.The collection of poems by Albert B. Casuga was to have been the other half of a volume featuring the short stories of Cesar Leyco Aguila and Casuga's poetry. The publishing house decided to publish it separately, and is Casuga's eighth collection of poems. Aguila is a Philippines-born Australian writer who came out recently with a novel, Between Two Worlds, and lives in New South Wales. 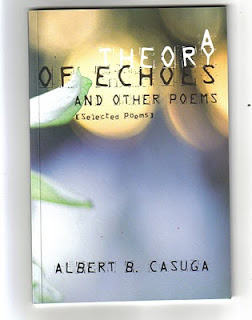 ( FOR LARGER ZOOMS, PLEASE GO TO http://albertbcasuga.blogspot.com/ Click on the image to zoom in on the text.)
The author acknowledges the assistance of Dr. Ophelia Alcantara-Dimalanta, UST Writer in Residence, in the publication of this collection. Dr. Alcantara introduced Casuga's first collection of poems, Narra Poems and Others (San Beda College, Philippines, Publications), in 1968.