ALBANO WRITER FROM BROOKLYN EXCITES HER UNCLE. To this blogger, "if you can make it there, you will make it anywhere!" I share his joie litteraire. Poet, priest, and literary patron, Seminary Rector Rev. Francisco Albano has introduced this blog to yet another Albano writer; this time, a granddaughter of the late Don Francisco "Paco" Albano, Jr., (whose Spanish love poem ---ca. 1948--to his recently deceased wife, Sra. Crescenta Rojas Albano graced this blog recently) and a niece of my literary confrere and brother in all things spiritual (including pilsen and vino rojo, Dave?) Francisco III (Pax Vobis blog author).

I am immensely pleased to find that the succeeding generation (see my blog post on my son, Albert Beau writing poetry in an earlier life) has taken up the lost cause of literary writing in a world of pulp and insipid vampire stories.

Rev. Albano wrote me to introduce our literary successors: Dear Albert, PAX! Wanda and Louise are my young nieces who want to be literary artists. Both are Ateneo grads. Wanda has MAs in Comparative Literature and Creative Writing. She is in NY solo. Brave heart. At last I get to read her work. Excellent read, I think. Well-crafted short-short. What say you, hermano? I have yet to send her my comments. Nothing from Louise (yet). It's just three of us in the clan interested in literature.

I am sure Father Paco was responding to a reading of my post on my heir-apparent, unico hijo Albert Beau's poetry.

To his email, one of his periodic literary missives, I dashed back a note that I wanted him to on-pass to Wanda. I have, en passant, heeded the challenge of Fil-American writer and creative writing professor Barbara Jane Reyes (PAWA Inc. Blog), to "be wind beneath the wings" of emergent writers from the Philippine-American ethnic diaspora.

"Hermano. I like the story very much. It could have been a poem. The central image of the desktop computer is felicitous. A life of building, trials, caring, memories --- what better objective correlative (theme in fiction) is there? Thank God, Wanda still believes in the short story's structure --- you know, expostion, initial action, complication, denouement. It is a successful short story, and a bonus in getting to the bottom of the autobiographical material being the compleat description of their disintegrating vinculum. What can I say? It is a story that I would have wanted to write myself!"

"Roadtrips and Endings" is a story in many levels. It is the slice of life unwritten in the brief prose which struck me as the "story behind the story". Sad. Masterfully written. I empathize with the broken heart moving away in a roadtrip and the endings left on the curb of a deskstop computer that was not brought along. Left behind. Now dysfunctional. Memories still intact in its derelict hard drive. A death on the street curb, on a dreary and humid afternoon like this. Some rain should fall soon.

The reader has been warned. (Those who still subscribe to E. A. Poe's short story structure will delight us still with their stories that tell stories. You know, like grandmothers, dads and moms, still say: And they lived happily (or sadly) every after.) To my readers, I am proud to introduce Wanda, who has allowed us to reprint this story which was first published, she said almost apologetically, by a "small literary journal in good old Brooklyn." 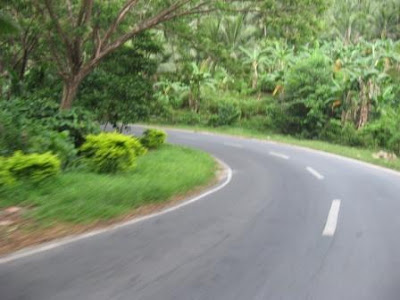 MY HUSBAND was not someone who would ever claim to have read Tolstoy or Proust for pleasure. When his mind needed a book, he went to Asimov or Bradbury, or Gaiman and the occasional Moore. He read Wired rather than The Economist. He played World of Warcraft in his spare time. He was on Linux before he was on Windows.

He was different from the other men I had dated. He was practical. Quiet, but not with the smoldering, simmering intensity I had come to expect from silence. Staunch, but with a firmness unlaced with arrogance. Instead, he was shy in a matter of fact way, because to him it was the path of least resistance. He took everything in stride, was seldom ever flustered.

At first, I didn’t know how to handle his stoicism, his almost stubborn lack of drama. Now I recognize how similar we actually were. Together, we inhabited a space that had been cleared of the debris of previous entanglements, emptied of the chaos of past emotions.

That isn’t to say that we kept secrets, because we never did. There was no cause. Instead, we held the various pains and sufferings up to the light, displayed in stark, naked glory, each put in its place. Deprived of mystery or shadow, drama never seemed able to gain a foothold. There was too much objectivity, too much plain logic. He was just that kind of man.

I used to imagine that this clean, open-minded pragmatism was the cornerstone of our equilibrium.

I used to imagine that this equilibrium anchored me.

***
One afternoon, in our flat in Forest Hills, he came home with a bulging duffel bag slung over a shoulder, his delicate, long-fingered hands clutching a much battered cardboard box. He poured the contents into the carpet of our bedroom floor: cables, wires, plastic and metal and copper things.

“You’re going to build a desktop,” he told me, smiling.

We did this on occasion. I would buy him a book that I thought he might like, which he would then read, but we knew it was only to please me. He would explain the inner workings of the virus mind, and I would listen and nod my head, but it was only to make him feel like he had taught me something, that our intertwined lives served some higher purpose.

That weekend, I sat on the floor and began the trying task of assembling a computer from various spare parts culled from office storage spaces and friends’ garages. He was meticulous, and I tried to be patient. We discussed the special uses of this new thing which we were to create. What kind of sound card would we need? What kind of video? How fast did it need to be? How much memory? What programs would it need to run? What OS? The project soon took a life of its own.

We modified everything that could be modified. We adapted a hybrid cooling system that integrated special fans and water-filled tubes. We tested different motherboards. We clipped and extended wires, wrapped and twisted copper into intricate braids, scoured the discards of even more geek-friends. He tested various open-source software. Our only rule? We would not spend a penny.

It took a few days, but when it was done, I felt like I had given birth to a child. There it was, an enormous desktop carved from scraps and refuse, assembled by my own hands. We gave it pride of place in our apartment. I used it everyday until we had to move.

We decided to move to Las Vegas.

I don’t remember the intricacies of that conversation. I don’t remember the paths that may have unwound in my mind. But I do remember telling myself that if nothing else, it would be different. Interesting. Another chance to push myself out of my ever-shifting comfort zone. Another piece of the world to see.

The day we were supposed to leave New York, we stared at the computer we had once built. It had been painted a riot of purples and blues and reds – my idea, a sort of brand to claim it as my own. The behemoth had now been unplugged and disconnected, stripped of any kind of function. It lay uselessly in the greenhouse, surrounded by the other discards of our lives.

“Let’s take it with us,” I said finally.

“I guess we could try,” he replied.

We hauled monitor, keyboard, and tower out to the garage. We had created this, I kept on telling myself. Each piece had been carefully selected from the rubble. Each bob and bit and copper wire inspected, cleaned, and modified. We had picked the colors. We had installed and adapted its programs. It was a repository of unbacked-up code, of forgotten stories, of unfinished poems, of the beginnings of memory. In this thing – this lifeless heap of odds and ends, we had poured pieces of ourselves.

We lay the various parts on the sidewalk. I opened the door to his car.

The backseat was so full, I feared that moving even the tiniest thing would cause this tangible manifestation of our years together to collapse, like a house of cards. This was the puzzle of us, I thought. Books and speakers, pillows and paintings, geeky little figurines. Separate little things, piled up on top of each other haphazardly for no other reason than the fact that they had to be moved.

My life and his, unravelled to a puzzle in the back of a car.

And the desktop we built continued to lie dispassionately on the side of the street. It wouldn’t,
couldn’t ever fit. So we simply left it on the curb.

WANDA “MITA’ ALBANO, a Brooklyn, New York-based writer, is a third-generation progeny of the Albano clan of Isabela, in the Northern Philippines. A graduate of Ateneo de Manila University in the Philippines, she has MAs in Literature and Creative Writing. This blog has had the honour of publishing the poetry (in Spanish) of her grandfather, Don Francisco Albano, Jr., and her uncle, Rev. Francisco R. Albano, a poet and seminary rector in Isabela. She lives in New York and is working on her first novel.

This blog is definitely entertaining and also factual. osg777 I have picked a bunch of helpful advices out of this source. I ad love to come back again and again. Thanks!