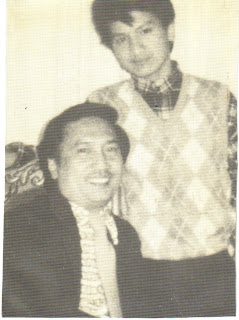 POEMS BY ALBERT BEAU CASUGA (ca. 1980s)
--- RECOVERED POETRY, A TREASURE FOUND,
CHERISHED MEMORIES
The second round of my "spring cleaning" is being done in the middle of summer. All on orders of the mother of my children and my supreme care and direction-giver. Last week, rummaging through the "dispensables, throwables, and absolutely overstaying junk in my study," my woeful travails and painfully revolting dusting of books and clippings, et alia (of agonizing about which ones to trash and which to keep longer up to my dying days, I hope) were assuaged somewhat by discovering a long-lost treasure: my son Albert Beau Casuga's first attempts at writing poetry, lovingly bound in a thin, brown-with-age, libretto.
I have been looking for these for some time now. They would make good material for this blog. Poetry written by "the apple that might not have fallen far from the tree." Although these were his first forays into writing poems, I have a feeling that he could still pick up from their energies should he see them again. Hence, this post.
(Please click on the image to zoom on the text.) 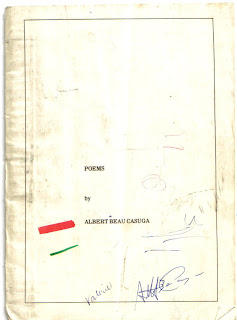 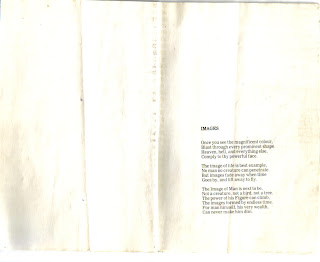 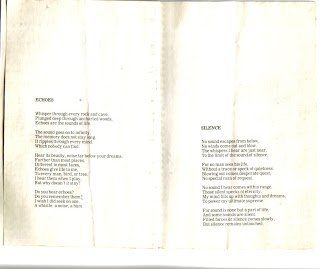 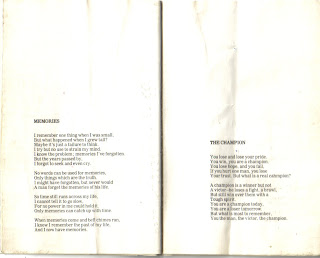 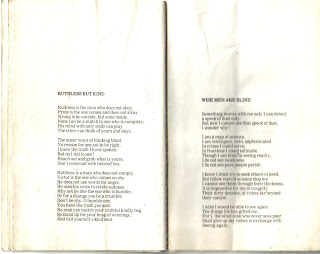 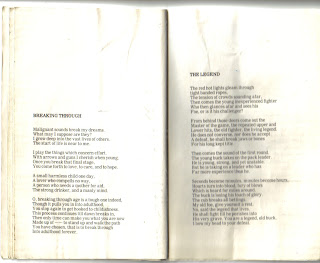 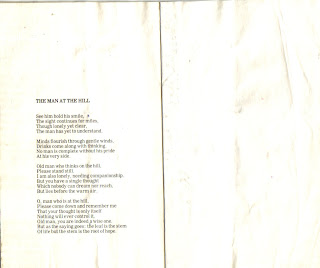 The collection was hidden between books and test papers when I found them. Albert Beau was in high school then. I took the poems with me to my office, typeset them, and pasted them together to resemble a book. He never looked for them, though. He never asked for them. I felt they have always been his way of creating that link, that vinculum caritatis, a son's unspoken reassurance that the genes have not been altered a lot. A poet's son must also be a poet. And all that genetic magic or maybe mumbo jumbo.

I thought I would publish them now, or they will forever perish in the limbo of other interests my progeny have gone into. All my five children are reasonably literate and immensely expressive of their opinions (on everything from pebbles to diverse Weltanschauung), but none of them ventured into creative writing in their adult years. Wisdom and empathy for my creative agony (rarely ecstasy) must have taught them to steer away from this pain-in-the-you-know-what artsy fartsy urgencies that would ultimately not amount to a pound of beans. Good thinkers, these kids.

But once upon a lifetime, I ached to see one of them improve on my chosen art, and write the best yet seen in the realms of poetry, the queen of the literary arts. Maybe in another life. But for the nonce, here are Albert Beau's poems. I learned much from them. Even felt pangs of guilt and missed moments of knowing him as he grew up. I hope it is not too late.
The tenth and final poem in the collection is my favourite. "The Man at the Hill", I suspect was about me, addressed to me, and I should have been more attentive to his plea: "O man who is at the hill,/ Please come down and remember me..." I recall the one time Albert Beau and I sat on a slope near his school's track and field at T.L.Kennedy High School in Central Mississauga. I must have been lost in the maze of onrushing thoughts about the magazine I was editing for the Metroland Publishing's leisure and entertainment periodical, SMILE. He sat silently, impassively, ahead of me on the mound, preoccupied with his own thoughts (he never really talked to me about them. He kept them to himself when he was sixteen. He still does at 43. I wonder if I really knew my son, then. Do I really know him now? I wonder if my own father, the late Francisco F. Casuga, ever asked that same question, too, when he wondered why I wrote what I wrote when I was in high school myself. As editor of the school paper, The La Uinon TAB, I did sneak a poem into the tabloid's literary pages (monopolized the column inches, I realise in hindsight). But I concede, without reservation, that upon re-reading my son's poems when he was 15 or 16, that he wrote better ones than I did at the same age --- I could understand his poems, I could not decipher mine.
Even at this point, I still think that I write poems which I know I understand when I have just written them, only to realise that a few years thereafter, only God or his counterpart in Hades might be patient enough to put a peg on what in blazes I am being lyrical about!
--oOo--
When my wife gave birth to Albert Beau (yes, we had decided to name him thus even before his debut in this planet) on April 3, 1967, I scribbled one of those poems which make me scratch my head now. The Manila Sunday Times Literary Supplement published it, and I am almost sure even those who printed it then (Editors Gloria Goloy? Ben Afuang?) are wondering what on earth I was trying to say.
--oOo--
A MISCHIEF OF CIGARS
You were a break of laughter
firmly cut on Father's chin before your birth.
Your life was a smile in the mischief of cigars.
You have been born before in a shock of memory
when all Mother could remember were nights
Father was the agile dancer dancing dense
the deep dark duty that you were.
(From Songs for My Children)
---oOo---
This was written way before Clinton-Lewinsksy. And I may have had dauphine-pretensions and imperial obsessions for a Prince. A suspected ligne donnee would be: Every father feels like a King when he has sired a son. Let the critics take a jab at guessing.
Posted by ALBERT B. CASUGA at 3:04 PM

This blog is without a doubt awesome and informative. idn poker online I have picked up helluva handy advices out of this amazing blog. I ad love to come back over and over again. Thanks!