ON THE DIFFICULTY OF DISCERNING SHAPES IN THE DISTANCE: A POEM BY LUISA A. IGLORIA 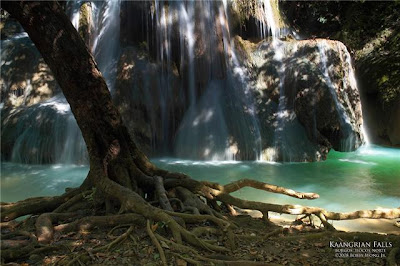 (Please click on the image to zoom in on the poem's text. The ideographic aspirations of the poem on the page require that the poem be shown as a "picture.") 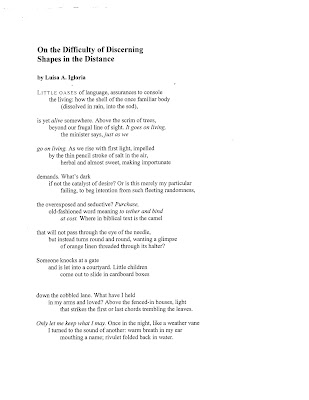 From time to time, we come across good poetry that we are compelled to share with readers and the rest of the literary world as an exemplar of what should be written and read as "poetry" as opposed to a welter of mediocre and even thoroughly bad verse being published as "poetry" in both print and world-wide-web media.

A teacher's old habit of presenting models gauded me to write this post which, however, should primarily be read as my admiration for Luisa Igloria's poetic skills.

On the Difficulty of Discerning Shapes in the Distance earns quite convincingly its label as poetry. Its content (subject, theme) dictates its form and its ideographic format achieves its content vice versa.

A rhapsodic limning of desire, longing, nostalgic aching, and a resignation to an absence, this poem uses aptly chosen images to objectify and subjectify these furtive thoughts and immense angst for lost love that must finally find its surrogate either in indelible memories or those "Only let me keep what I may."

They are "little oases of language" that keep these go on "living, ...just as we go on living." What distinguishes this imagery from what could otherwise become maudlin is the author's use of lines like: "As we rise with first light, impelled/ by the thin pencil stroke of salt in the air,/ herbal and almost sweet, making importunate demands. What's dark/if not the catalyst of desire?" This juxtaposition of "first light" and "dark" makes palpable the transformation of familiar odours (bedroom scents suffusing rooms and sheets still) to the tugs of desire in the dark as a "particular failing, to beg intention from such fleeting randomness,/ the overexposed and seductive."

--oOo--
Is there anything forbidden in this arousal? The mark of the superior poet is seen in the allusion to the proverbial "camel passing through the eye of a needle " with these "wanting a glimpse/ of orange linen threaded through its halter." A glimpse of what had been pleasurable in the dark once upon so many nights now lost on the sheets yet viscerally urgent in hoarded reveries. Such restraint is uncommon. Only mature poets are capable of that. It could become verbal diarrhea in lesser lights.

The poet, a skilled dress designer and maker, impresses with her use of images from this trade: "scrim of trees" ( an alignment of trees fencing in or out a space), "eye of the needle" (a painfully narrow path for an avalanche of longing and desire), "orange linen threaded through its halter" (a prime colour, orange --- not red --- expresses not lust but a robust wanting objectified by this linen thread passing through its needle's halter. Again, a restrained but erotic image nevertheless.) . All these collateral images concretize, as it were, the "fleeting randomness" of seductive remembrances "purchased" now in palpable memories "to tether and bind at cost." Will this amour last? Pray, let it stay longer.

But "someone knocks at the a gate/amd is let into a courtyard. Little children/ come out to slide in cardboard boxes/ down the cobbled lane." This is reminiscent of the tug on the harness of the Robert Frost horse while stopping by the woods on a snowy evening --- he cannot stop forever marvelling at the "woods (being) lovely dark and deep...But I have promises to keep/ And miles to go before I sleep." Reality is an interloper. The children will play their carboard games.

The exquisite pain or hurtful pleasure are in the persona's plaint: "What have I held/in my arms and loved?" It is "light" above fenced-in-houses "that strikes the first or last chords trembling the leaves." Ending in mundane wakefulness, this is the persona's "difficulty of discerning shapes in the distance." But distance, of course, gives the persona a "distance-given-right-to know" in the words of Philippine poet and National Artist Edith L. Tiempo. Either way, both dread and longing are realities. Realities will wake the somnolent up. And all fall down.

"Only let me keep what I may." Like "Once in the night, like a weather vane/ I turned to the sound of another: warm breath in my ear/ mouthing a name; rivulet folded back in water." The need will be sated. A "rivulet" will quench this thirst. But that, too, will fold back in the water. The stream will flow on forever toward a sea that engulfs a universe of longing, desire, need, pain, angst, and an unending supply of wishing.

Seen as a poem-on-the page, the meandering lines recall the ebb and flow of the sea waves. The rivulets rejoin the sea. They are part of the water again. A fleeting reverie dies, the doleful world supplants it. As an ideographic aspiration, this form has its roots in Ancient Chinese and even Zen poetry. The truncation of lines where key substantives are (console, body, sod, trees, living, we, impelled and all the way down to the final line "rivulet folded back in water" that makes the discernment of shapes in distance truly difficult) may not have been consciously intended by the poet, (she certainy has done it intuitively through her language and images) but this is the case where the content is shaping up the form, and the form shapes up a receptacle for the looming content. As in pottery. Yes, New Critics called it: "achieved content."

Luisa A. Igloria is the better poet for her use of content and form that objectify a wisp of an experience into a palpably affecting aesthetic experience. But I do not want the reader "to miss the many splendoured thing," by more hermeneutics. 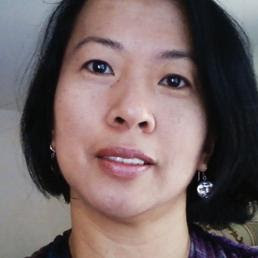 Luisa A. Igloria was born in the Philippines and
received a PhD in creative writing from the University of Illinois. The author of ten poetry collections, she received the 2009 Ernest Sandeen Prize for Juan Luna’s Revolver. She was chosen by Ted Kooser as the recipient of the 2007 James Hearst Poetry Prize and by Adrienne Rich for the 2006 National Writers Union Poetry Prize, and she was a finalist in Narrative’s First Annual Poetry Contest. Igloria directs the MFA Creative Writing Program at Old Dominion University, Virginia. (From Narrative)

--oOo--
Originally from Baguio City, in the Northern Philippines, Luisa is also an eleven-time recipient of the Carlos Palanca Memorial Award for Literature (the top literary prize in the Philippines) in three genres (poetry, nonfiction, and short fiction); she has also been inducted into the Palanca Hall of Fame. She has published 10 books including Encanto (Anvil, 2004), In the Garden of the Three Islands (Moyer Bell/Asphodel, 1995), and most recently Trill & Mordent (WordTech Editions, fall 2005.) Trill & Mordent was a Runner-up for the 2004 Editions Prize, the recipient of the 2005 Calatagan Award from the Philippine American Writers and Artists organization, a nominee for the 9th annual Library of Virginia Literary Awards (poetry category) in 2006, and a nominee for the 2007 Global Filipino Literary Awards (poetry category). (From Panitikan, ph.)

Imprimatur: (Following is this writer's comment sent to Ms. Igloria's Blog "The Lizard Meanders" asking for permission to republish her poem (published by Narrative).

Luisa,
The deep ambiguity of this poem had me spinning looking for the object of "the dark catalyst of desire." A love poem, no doubt, it could be a remembrance of someone, something dead but un-dead "making importunate demands."
Then someone knocks at a gate --- "what have I held in my arms and loved?" This new one, this surrogate, strikes the chords "trembling the leaves." Will this amour last? "Only let me keep what I may." The "warm breath in my ear mouthing a name" is the "rivulet" come to sate the love thirst. But it does "fold back in water."
Luisa, what a powerful last line. What a lovely, lovely love poem.
May I publish it in my lit blog with an analysis of its poetic equipment and a critique of how it achieves its content through its truncated lines and conceits (I saw the Narrative lines.)?
As always, you write excellent poetry. Congratulations.
ALBERT

Never regret. If it's good, it's wonderful. If it's bad, it's experience" mantul138