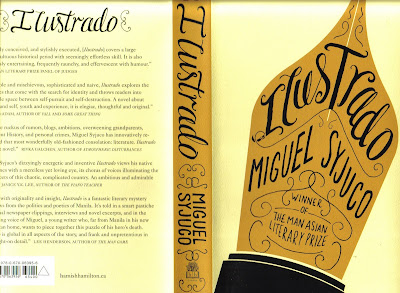 WILL SUCCESS SPOIL MIGUEL SYJUCO?
When Miguel Syjuco's Ilustrado took Canada by storm, I realised that the ethnic diaspora in this country has always looked to immigrants for its literary stars: Ondaatje, Okri, Hill, Roy, Martel, Delillo, Uppal, Moritz, among others. That Syjuco enjoyed the most expansive and most generous publicity is certainly not only because of the PR blitz that his publishers were capable of, but it also had to have something to do with the "Melchizedek who comes to the scene unexplained":
The doctoral student doing desk work copyediting in an English newspaper in French Quebec, the globe-trotting bon vivant estranged from his Philippine family which has considerable wealth and real political influence (his father was a Cabinet member in the late President Corazon Aquino's government) and who are themselves considered "ilustrados" (the gentry and the ruling class) in that postcolonial Southeast Asian archipelago, the son who abandoned a lucrative economic future with a father-sanctioned economics degree from one of the most prestigious universities in his country, and one who forsook a wealthy life to seek his fortune in the unforgiving urban centers of New York, Montreal, and Toronto as a driven writer. Yes, he took on menial jobs. Yes, he suffered the estrangement of kith and kin (I remember teaching one of his older siblings, Cesare,--- or is it Augusto Jr.? --- in one of the Catholic universities in Manila). He lived in penury and privation. So what? In between desking on the graveyard shift and regaling his Edith with his prose and poems, did he not emerge with this country's grandest literary debut in the last 30 years or so?

The Globe and Mail's Charles Foran introduced Ilustrado in his pre-publication debut review (May 8, 2010) as "difficult or even unreadable." In the formal tradition and innovative thrust of Laurence Sterne's Tristam Shandy (1760s), James Joyce's Ulysses (1922) and David Mitchell's Cloud Atlas (2004). "They have also nearly always been what is new and most exciting."
Foran predicted: "Ilustrado, the first novel by young Filipino writer Miguel Syjuco, may well prove a literary bridge-builder between the formally innovative and the reader-friendly." A generous estimate this, because publishers have always yearned for something between the truly literary and the sales-viable pulp. Foran believes Ilustrado "has worked out...the project for a new kind of Asian identity, one that can simultaneously sort through the messes of the colonial past while staying alert to our emerged century of almost too easy East/West flow and too many alignments of formerly solid borders."
----o----
The Globe review comes across as a high-flown, postgraduate-seminar essay with cultural, political, and academic gibberish like "In so doing, he (Syjuco) realizes that he is able to unite his globalized, deracinated sense of self with that of the earlier Salvador, a member of an older, vanished 'ilustrado' class of learned, erudite but also colonized and creatively crippled Filipinos."
The panegyric flood preceding the book launch was understandable as a sales pitch. But will it be able to withstand the cold-eyed, critical yardstick of the literary grumps, the critics who lurk in musty libraries waiting for a bright star to streak across the literary sky, and giggle at rank pretensions of the turks who come to the scene anointed sans prerequisite literary circumcision?
----o----
The Toronto Star's post publication review by Alex Good (July 11, 2010) appears to be a hard-headed look at Syjuco's novel. "Dysjunction and indeterminacy are Syjuco's aim...some parts, like the series of lame gags involving a character called Erning, don't appear to have any point at all. Others like the running commentary on contemporary Philipine politics, seem to belong to another book... The resulting loss of focus makes it hard to keep straight what Ilustrado is finally supposed to be about...This confusion is compounded by the shifts in voice and tone...For all its unevenness, there's no denying Ilustrado is a good first novel."
----o----
Good, however, feels that the novel "registers more of a lack of confidence than literary flair", as shown in the trick ending, "wherein the story swallows its own tails." The Star's post-publication review is not daunted by earlier hossanahs registered by all and sundry in the publishing and literary journal world. It engenders sobering thoughts (hope, really) that literary reviews will once again beef themselves up with relevant literary theory and aesthetics, rather than burp with literary criticism bloated with hermeneutic gobbledygook signifying nothing or rank misunderstanding also known as literary ignorance.
This post is a quick scanning of the Syjuco phenomenon. The harsher yardstick will come sooner or later. Syjuco is much too significant a writer to ignore. This writer is prepared to ignore their mutual exile and literary allegiances in the ethnic diaspora. Is Syjuco any good? Will he not perish soon enough as the proverbial firebrand? Harsh questions, but all indications are that he will thrive. And may his tribe increase.
(Please click on the image to zoom on the text.)
The Star's take with Alex Good (July, 2010) 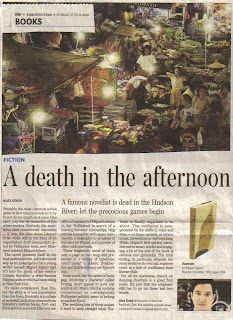 The Globe and Mail publicity Ad sent our by Penguin, H& H. 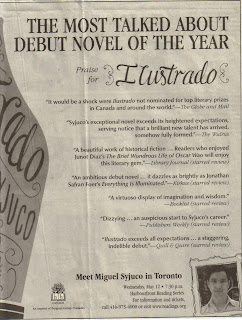 The Globe and Mail pre-publication review by Charles Foran. 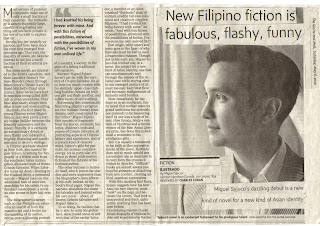 Will Syjuco's sheen last? From the fallout, he seems to have arrived, the debut novel notwithstanding.

(Included in this Walrus issue is Syjuco's "Stet", a short story about two newspaper deskers wheedling the other for a switch of schedule, in dialogues ala the saltless gab of Hemingway characters in A Clean Lighted Place and The Killers.)
Predictably, with the blazingly bright Canadian debut of Ilustrado, Syjuco has effortlessly grabbed the limelight with a Hemingway-esque fiction ("Stet") published in July/August issue of The Walrus, Canada's most prestigious magazine, indepth pre and post interpretive analysis of the Philippine elections won by Benigno C. Aquino III, the island's 15th President, in the Op-Ed sections of Canada's venerable nationaly daily, (The Globe and Mail "Counting on Aquino," May 15, and the morning after the election, "The Son also Rises: Meet the New Aquino Saviour") --- a rapidly spreading literary fallout that also reflects Canada's wide-eyed awe of an obscure copy desk editor (Montreal Gazette, Quebec's English daily) who surprised the literary world by winning the Man Asian Literary Prize with his erstwhile unpublished manuscript. Of course, after the win, the publishing world from Penguin to Strauss to Hamish Hamilton tripped over each other grabbing the debut novel for their publishing coups. At this writing, Ilustrado has remained in the bestseller list of new fiction in North America. Translations in Chinese, Japanese, Indian, Arabian et al cannot be far behind, the publishers having smelled the sudden flash of nuggets from a curiously well-publicized arrival in the scene. Miguel Syjuco, nevertheless, is a "Melchizedek who comes to the scene unexplained" in North America's literary diaspora, not to mention the moribund mainstream literary enclave in Toronto, Montreal, and Vancouver (British Columbia).
----o---- 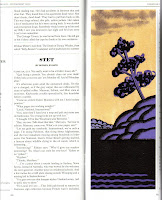 The Walrus published his story "Stet" as one of the Summer Reading treats.

Syjuco has metamorphosed into a chronicler on anything Philippine. In this case, the election of President Benigno Aquino III, son of the martyred Ninoy and the beleaguered wife, the late President Corazon Aquino. 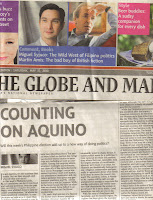 The Globe and Mail might just spirit away Syjuco from The Montreal Gazette, even as the latter is undergoing throes of union problems and circulation difficulties.

Miguel Syjuco hopes to teach some time or the other after his doctorate, preferably at world-class McGill University. That might help with his literary aspirations. With the single novel, assuming it will continue to sell, he could have enough to fund other novels, other voices, other rooms, but literary nevertheless.
This blog promises to bare the "splendour" that is Ilustrado but with the rigorous measure of literature not pulp. Meantime, just watch Syjuco.
Or just watch this blog.
Posted by ALBERT B. CASUGA at 4:12 PM

This blog is definitely entertaining and also factual. idn poker online I have picked a bunch of helpful advices out of this source. I ad love to come back again and again. Thanks!