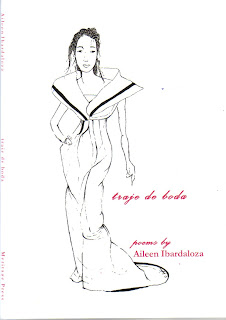 This collection is a mosaic shaped into an intriguing tapestry by a fearless literary pasticheuse.

It is mainly a celebration of betrothal, weddings, nuptial habiliments and fashion woven into the context of history (viz., Filipino hero Jose Rizal writing a farewell note to his dulce extranjera --- beloved foreigner --- on his day of execution), remembrances of iconic mothers, fathers-giving-away-daughters-in-weddings, and the ineluctable (also inscrutable) changes of lives from house furnishings to migration exiles.

Ibardaloza is most sensitive to these generational changes in a poem dedicated to her mother, “The Hay(na)ku of the Broken Fourth Wall.” Without sounding maudlin, she limns in the hay(na)ku structure (an invention of Philippine-born American poet Eileen Tabios, and also the Meritage Press publisher of this debut collection) the saga of two women --- Ysabel and Cecilia --- who take diverse paths from a genteel colonial past to a ravaged contemporary life of struggle and guile in a gated-mansion that would find itself converted to a bar.

The Philippine-born Ibardaloza, now Northern California based, regales in her use of the new-found hay(na)ku like a student showing her teacher-sensei-maestro, how adept she has become.

She has not, however, mastered the use of the “glossa” in the poetic verve that Canadian poet P.K.Page used it. “Road Trip (A Found Poem)” falls short of the demands of this form which uses quoted lines as ligne donees (given lines) of poems developed from them. This is an equivalent of the Ekphrasis which springs from a picture or a visual image.

In her “After Eileen Tabios’ Footnotes to the Virgin’s Knots by Holly Payne”, the footnoted lines would have served as the given lines whence the poems would spring. This is how the glossa works. Ibardaloza missed that.

Ibardaloza ‘s real voice is what she uses in poems like “Across the lonely beach we flit/ Like shorebirds, lingering. Wind and/ water brush against sand and sky. I / feel the sand beneath me. / You engage the wind. I/ follow until you are unseen to me. / I will wait for you/ here, where waves break toward/ the shore. Hear my call, rare wanderer./ I will love you then.”

A poet who can write a love poem is a poet, indeed. This poet can write love poems (see “For Paul,” and “Eve of St. Francis.”)

Ibardaloza might just be missing where her voice is most authentic --- she seems to be obsessed with her narrative use of the hay(na)ku (a three line stanza that starts with one word, followed by a two-word, and sandwiched by a three-word third line. The classical haiku is made up of three lines with a 7-syllable line enveloped by a first and third lines of 5-syllable each).

A debut collection like Traje de Boda promises an impressive future for a young poet like Iabardaloza, a microbiologist by training, but the caveats of a sustained poetic life still lies in how she matures beyond fascination with “novel” equipment for her aesthetic experiences.

An authentic poetic voice and an achieved aesthetic experience are among these caveats she should heed while she could.

Meritage Press is delighted to announce the release of traje de boda, a first poetry book by Aileen Ibardaloza.

Aileen Ibardaloza is a poet and memoirist who first trained as a molecular biologist. She grew up in Manila, and studied and traveled around Asia and Europe before joining her family in the United States in 2000. She was married in 2009; she and her husband live in the San Francisco bay area. Also the Associate Editor of Our Own Voice Literary Ezine, her writings appear in various online and print media including Manorborn; 1000 Views of Girl Singing (Leafe Press, U.K. and California, 2009); A Taste of Home (Anvil, Manila, 2008); Fellowship; Moria Poetry; and Galatea Resurrects.

Eileen Tabios (born 1960) is an award-winning Filipino-American poet, fiction writer, conceptual/visual artist, editor, anthologist, critic, and publisher. Born in Ilocos Sur, Philippines, Tabios moved to the United States at the age of ten. She holds a B.A. in political science from Barnard College and an M.B.A. in economics and international business from New York University Graduate School of Business. Her last corporate career was involved with international project finance. She began to write poetry in 1995.

Tabios has edited or co-edited five books of poetry, fiction and essays released in the United States. She also founded and edits the poetry review journal, "GALATEA RESURRECTS, a Poetry Engagement".

She is the founder of Meritage Press, a multidisciplinary literary and arts press based in St. Helena, California.
--- (From Wikipedia)
Posted by ALBERT B. CASUGA at 5:18 PM