A MARCH BREAK AT SEA

Engulfed by the sea, one regresses, as it were, to some point of stillness --- the womblike still point whence life begins and ends. It is going back to a beginning and knowing it for the first time. In Eliot's words: We shall not cease from exploration/And the end of all our exploring/ Will be to arrive where we started/ And know the place for the first time.

The allure of cruises as vacations lies there -- the stillness, the simplicity. If only the threat of a perfect storm were not there. There lies, too, the exquisite danger of it all; the teetering between stillness and disaster. 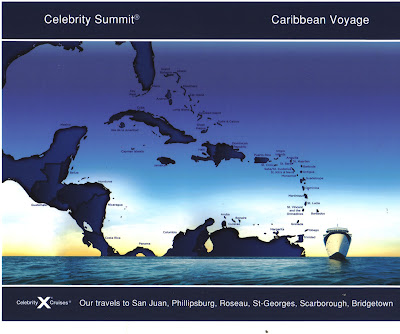 It is the river as mother to the sea
Entraps us into this womblike feeling of ease;
It is the river draws us to this discovery
Of need, our quiet helplessness.
We are the river ran its course
Into an engulfment of restless sea.

A cruise is a perfect "going away" vacation. Having just finished our fifth, we plan on taking the promise of the "Allure" in 2011. A cruise mimics the stillness and simplicity of crossing some divide where one "goes away" but is able to "come back". Having one's cake and eat it, too.

Posted by ALBERT B. CASUGA at 6:12 PM No comments: 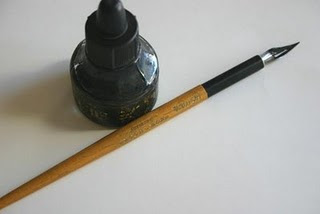 In a recent Literature in Other Languages post, Dr. Isagani Cruz cited efforts at studying contributions of immigrant writers in Canada in using heritage languages in English writing and an attempt to create a hybrid or neo-language that extends ethnic culture to Canadian society .

Referring to a doctoral work by Asma Sayed, (University of Alberta, ca. 2006) Dr. Cruz, also quotes Sayed as explaining her study as an effort to look into how the use of heritage language might retain cultural identity.
Mainstream Canadian writing, however, has not found the injection of diaspora language into the core English language literary medium useful. It has practically bamboozled all published writers into adopting and adapting to the Canadian lingua franca: English (the King's English as well as regional adaptations with tinges of American idiom).
The literary scene is still dominated by older generation writers like Margaret Atwood, Mordecai Richler (+), (Jewish/Montreal Francophone) Michael Ondaatje (Sri Lanka emigre), Robertson Davies (+), Alice Munro, Mavis Gallant, P.K. Page (+, poetry), to name a few. They have not found multilingual literature useful despite the official cultural and linguistic diversity of a pluralistic society like Canada.
Neither has the most recent anthologizer of "The Best Canadian Poetry in English," 2009 Griffin Poetry Prize winner, poet A.F. Moritz, seen multilingual/multicultural literary energies prevalent in the poems he selected for this 2009 "best Canadian poems". (I am writing a review of this audacious second in a series --- started in 2008 by Tightrope Books , ed. Molly Peacock---and hope to publish it soon).
In light of the above, we are commenting on Dr. Cruz's post on Canadian writing. (We will try to get in touch with Dr. Sayed, if she is still at the University of Alberta, to obtain an update on her thesis on diaspora writing.)
--o0o--

"Since the 1960s, South Asian Canadian writers have been contributing to the richness of Canadian literature. The immigrant writers that arrived in the Sixties were writing in Punjabi, Urdu, and Gujarati, while later immigrants started writing in English as well. But while writers writing in English have been recognized for their work, those writing in their heritage languages have often been ignored. Asma Sayed, for her PhD in Comparative Literature from the University of Alberta, under the supervision of Dr. Jonathan Hart, is interested in studying the politics of language in South Asian Canadian writing.

“'My study is two-fold: on one hand, I analyze the use of heritage languages in the writings in English; on the other, I study the literatures solely created in those heritage languages. I intend to study the interrelationship of language, culture, and diaspora.'” Asma’s interest in this area is backed by her knowledge of Gujarati, Hindi, Urdu, Sanskrit, and Punjabi languages and Kachchi dialect.

"The first part of Asma’s research focuses on how heritage languages are used in English writing. 'These writers are experimenting with English to create a hybrid language. This is a language which mixes Gujarati, Hindi, Urdu, Tamil, or others with English. By bringing their different cultural backgrounds from around the world to their writing, and thus creating a hybrid or neo-language, they are extending that culture within Canadian society.'

"While these neo-languages speak volumes about resistance and culture-retention, there has been no extensive study to demonstrate the use of heritage languages by these ethnic writers. 'In fact, at times, their use of heritage languages in the English-Canadian texts has been received negatively. I think it is important to address this issue as I believe that these writers use this mixed language for a purpose. Language has been one of the primary means of struggle in the post-colonial literary world. While this linguistic hybridity challenges hegemony of English, it also serves the objective of retention of cultural identity.'”

I have not read any recent work of Dr.Sayed on multilingual and multicultural writing, but I am probably doing what she suggests as a neo-language that extends one's culture within the Canadian milieu.

You might be able to glean this from the recent poems I have written --- in "A Lullaby", I wove the cultural energies of a native/regional language (Ilocano) to create a lullaby in English which lends itself to any rhythm of music, thus creating a multi-cultural lullaby rooted in universally recognizable images and poetic figures. (See http://ambitsgambit.blogspot.com May 3 post)

In the "Haiti Poems", I used Creole, French, and Spanish as strands of worldviews braided into the Haitian central image of a catastrophic temblor. (See the group of poems in the same blog, January 30 post).

Since I needed to concretize the experience of a ballerina's dance in another poem ("A Ballerina on the Window"), I felt it functional to use the terminology of ballet en Francais to lend the poetic utterance with the verve and traditions of the dance.

In "Basura Days", I used Spanish, American, and Filipino to encapsulate the pre- and post-colonial nuances of a worldview that finds its central image in "garbage" (as in objectifying the experience via "past baggage" and a gestalt of diverse cultural residues --- the ethnic diaspora).

Did these somehow enrich the poetic utterance? As espoused by Dr. Cruz -- and maybe Dr. Sayed in "resistance/culture retention" -- multilingual tools make for the multicultural (and perhaps universal) ambiance if not cosmopolitan orientation of the poems.

Is this a challenge to the hegemony of English or "the retention of cultural identity"?
If multilingual/multicultural literary tools are handmaidens to these political agenda, multilingual writing would unnecessarily be delimited. I do not subscribe to "retention of cultural identity" via literature. Literature must always enrich itself as a cross-cultural medium. Linguistic jingoism is not, a fortiori, acceptable.

What Ezra Pound (American) and T. S. Eliot (British) meant to accomplish with the interweaving of poetic utterance in other languages into the core English of their poems is the "importation" of cultural slices into the central imagery of their poems to figuratively expand its worldview, a Weltanschauung the poem is leaner without.

(I just got back from a Caribbean cruise which somehow reinforced my bias for cosmopolitanism --- I am happiest at a polyglot table where toasting is done in as many languages I can understand and inebriatedly try to speak. I imagine humans were meant to remain in Babel, so they could also blissfully return to silence which is, after all, the language of the soul.)

A LULLABY: YOU HAVE JUST BEGUN TO FIGHT

Close your eyes and fairy lights will lead you
Away from the dark and gloom that scare you:

Where the river bends, do you gather rotting fish,
Glean carrion left from a summer’s fishing mess?

Close your eyes and let the wind rip through
Tears and cracks and cranny and broken doors, too.

Grip the tightened string on your wayward kite,
No wind could wreck nor snap it loose from flight.
You will ride the wind, my boy, and touch the sun,
Though frightful prayers plead that you must run

It is too late to scream. Close your eyes, shut them tight.
Life is not a waking dream. You have just begun to fight.