(For archival purposes, this short story by Albert B. Casuga is being posted as part of the September 2009 post on A Harvest of Tales) 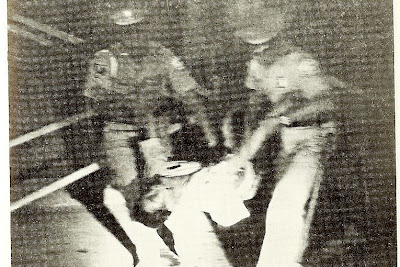 I’m going back home to get killed. That’ll humor the Old Man. I’ll get myself shot so they will have a martyr. After that, compadre … the real revolution. What did the French guy say, “Après moi, le Deluge”? Hah-hah.

He must have liked what he said, he even chuckled with the same naughty smirk he would put on when pulling newsmen’s legs.

On the plane back to Manila, Lorenzo Pimentel sounded hauntingly like the young motor-mouth senator he once was who doted on us press “gents” (a label he used that also included the women – he thought newshens was sexist, besides the male hounds can’t be called newscocks, can they?) He made sure no one in the Senate press gallery forgot that, as a teenager and (like most of us) a college dropout, he covered the Korean War, and he had seen guts spilled, blood pour, brains blown out, and, Jesus, writhed with the spasm of war in his testicles. So death is really nothing to him. Piece of cake.

Dealing with the American press has not taught you how to answer questions briefly, eh, senator? I ribbed him for his response to the Globe reporter’s reminder that there were warnings from Manila – and the Old Man himself – about some plot to kill the homebound senator as soon as he got off the plane.

Canada has taught you well yourself, compadre. You use the Eh? As our Batangueños would. Ala, E!

He was always quick at repartee and with sudden bursts of impressions like that. I told him that I needed to go back home before my accent got too good and visit the old haunts before the country got annexed by America, and before downtown Quiapo’s Chinese restaurants got so sanitized I’d miss the roaches, Ling Nam’s noodles, and tsia sio pao.

And the Times building? Yes! The taverns on Soler? Yes! The cabarets of Mesirecordia? Yes! And the seedy hotels of Ong Pin? Yes!

Ah, the debauchery of Nick Joaquin’s Manila. Sin City, here he comes!
Then, he fell silent. I looked away then.

Looking at the camera, he said, when we land, they would have to execute me. How else will they stop me from leading the opposition party back to power?

The cameraman zoomed in on his once chubby face, youngish but gaunt, a bit wrinkled now from the winter bites of Boston and the long nights of remonstrations with his wife — she pleading he must take advantage of the American asylum and forget about ever going back to Manila, and he insisting his life would not mean anything if he could not convince his people to throw the Old Man out and restore democracy . . .

Inside or outside of the stockade, and Christ, Nenuca! I cannot stand being a beggar in America!

Hyperbole was part of his style. Every issue, every election, every fight was always the last best fight.

I can still feel how I ached in the groin watching him play up to the cameras, being senator once again, trying hard to inject the odd joke even as his Mandarin eyes betrayed the utter fear: Will his death matter anyway?

On our way to the plane’s rear, I asked him if it was worth it at all. Would his dying for the old country matter to anyone, anyway?

Sensing I was being facetious, he raced me to the toilet, and he took time to pee.
When we arrived in Manila, Pimentel was promptly killed.

As I relieved myself of the pitchers of pilsen I must have consumed while keeping Mother awake with these remembrances of a plane ride, she called out from her room: When will you tell me why you’ve come home suddenly from Canada? Or is it the States? Saudi? Or are you going to stop talking about Pimentel and revolutions at all? How are your children? Are you drunk? Maybe you should get used to San Miguel beer again. Sure, it’s not like your Canadian beer because water here is pure.”

I puked. Oh, my God, she has just heard me describe a carnage worth the Pulitzer and she — like those students waiting at the airport, waving banners, welcoming their senator back from his exile — did not seem to care who he was, why they shot him, and what for.

Her voice trailed off to an explosion of dry cough: “You should have brought your son, Bertito, home,” she said in an almost cavernous voice. The old house was an echoing chamber. The long, clean, and wide planks of polished hardwood floors were now shorn of the tender and gentle bodies sprawled for relief from the cruel season’s heat. I felt like lying down on them while I purged the memory from my system, while I told Mother the story, like I used to when I would wait for Father to come home so he could pick me up from the floor, half asleep, still in hot pursuit of the elves and the naked fairies.

Lorenzo Pimentel was there sitting beside me, insisting I call him “Pim” like old times — he has never really lost his charm, Mother. All those years in the military stockade, the constipation in Boston, did not affect his manner of speaking — still in torrents; you’ll certainly feel something had gone wrong, however, because he spoke of God and the Virgin Mary more often than you would.

Then he told me why he was coming home, despite the news about his imminent destruction.

You see, I am already a dead man, he said as the plane passed over California.
But when the Old Man’s wife came to New York, he continued, winking at me, I went to see her at her Manhattan penthouse. Rather, she ordered for me to see her. He winked again.

Partner, out of the blue, she asked me if I wanted to come home and join her new party – to take over when the Old Man died. He was dying anyway. For the country, she said. For you, I said.

“By the way, how is your rich and shameless wife?” Mother’s inquisition was earnest.

But Mother turned to the well-preserved jukebox of a radio she promised was an heirloom, and she turned it on.

“Pimentel’s death is still on the radio! Santisima! They have even cut off the afternoon drama!” She spat out of the gaping window, but her saliva fell on the sill. “Punieta!” she cursed.

“And has your wife finally poisoned your mind, too, that you rant like a mad man?” Mother looked at my face, eyes, palms, and nape, looked away and sighed:

It was a single shot. Not unlike shooting a cow. Entered the right ear, bored a large hole, out through the chin. That could not have come from an assassin on the ground, Mother. No way. In any case, the soldiers shot an ugly man on the tarmac. Their goat.

A Member of Parliament, Pim’s old frat brod, screamed through his bullhorn: “Now is the time for all men with cojones to wage the battle in memory of Lorenzo Pimentel!”

A longhaired young man in the audience shouted: “Kill the soldiers!”

In the crowd, I spotted my old professor who used to moonlight for the Old Man’s press secretary (until the Secretary was fired for unexplained wealth); he was spoiling for a fight. “The Government killed him!” he shouted in his Batangueño dialect. His gaunt frame shaking, eyes bulging out of their sockets, he began to sneeze. He even exposed a fan knife tucked halfway into his hipwatch pocket.

Bewildered, the rest of the welcomers asked: What’s happening?

At lunchtime, Mother, all the welcomers had quietly dispersed.

It was single shot, the mortician told Pim’s mother when she picked his body up from the morgue. She touched his forehead and whispered:

“It was a single shot, Mother.”

“On my way home from the airport, I dropped by Amador Yonzon’s house and put a bullet through his head. Thanks to you, amor mio, the whole town knows he had been fucking my wife during her annual sabbatical here.”

“By sunrise, I will have gone to the hills, reached the Sierrra Madre. In a day or two, Mother, you’ll have your soap opera back on radio.”

“Santisima, hijo,” Mother bristled. “You do not make sense anymore.”

Sir Albert, I liked this fiction so much. Thanks for sharing...

It came in to me

I hope I could write better and with more sense everyday

Have a nice day po!