Over the weekend, a group of some 46 Filipino journalists and political sympathizers of Ismael Mangundadatu were ambushed, massacred, and buried in a common grave in Ampatuan, Maguindanao, in the southern Philippines, while they convoyed to help register the candidate at the town centre.
The Toronto Star today reported that the candidate was not harmed in the convoy, but the waylaid Filipinos, still smarting from the violence of sporadic insurgencies of Mindanao separatists and terrorists, were allegedly executed by armed groups identified with the civilian auxiliary forces of the government military units in Maguindanao.
An early indication of electoral violence facing the country in 2010, the incident inspired Philippine poet Mila D. Aguilar (inset) to write a bitterly prescient poem in sad riposte to another protest poem by American poet Denise Levertov when the same type of violence occurred in El Salvador.
The poem, emailed to this blog by Filipino Seminary Rector Francisco R. Albano, OSB, indicates the continued celebration of social and political protests in that Pacific country.
(The Reuters picture below shows relatives of the victims digging through the common grave prepared earlier by the waylaying assassins.) 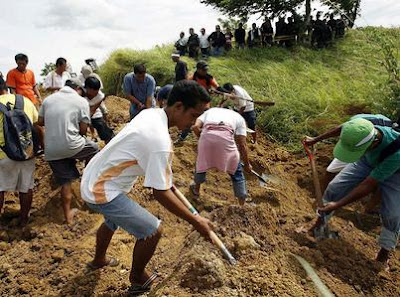 
Here, Denise, they don't
Chop off heads by the day
They just waylay you
On some lonely byway
Or highway
As the case may be
Whether you're alone
Or with
A convoy of journalists
Meant to protect your
Filing of candidacy.
One, two, fifty killed
Numbers don't matter
It's the principle that counts:
The principle of power
Over people
Of family
Over fold.
We know
No other life
We are the walking dead
Straddling the centuries
Without remorse
Shouting ourselves hoarse:
Producing nothing.

Because every day they chop heads off
I’m silent.
In each person’s head they chopped off
was a tongue,
for each tongue they silence
a word in my mouth
unsays itself.

From each person’s head two eyes
looked at the world;
for each gaze they cut
a line of seeing unwords itself.

Because every day they chop heads off
no force
flows into language,
thoughts
think themselves worthless.

No blade of machete
threatens my neck,
but its muscles
cringe and tighten,
my voice
hides in its throat-cave
ashamed to sound

into that silence,
the silence

of raped women,
of priests and peasants,
teachers and children,
of all whose heads every day
float down the river
and rot
and sink,
not Orpheus heads
still singing, bound for the sea,
but mute.


(Bio from Panitkan.com.ph, Philippine Literature Portal)
Mila D. Aguilar
Mila Aguilar (a.k.a. Clarita Roja) was born in 1949 in Iloilo. She started writing poetry at the age of nine. She edited the school paper at the UP High School. At 18, she was features editor of the Philippine Collegian and graduated with a BA English degree at University of the Philippines, Diliman, Quezon City. Then, she took her master's degree, taught English at UP, and joined Graphic magazine. A progressive writer, she was among those hunted when Martial Law was declared in 1972.

The Women Color Press, New York, published her poetry collection, A Comrade Is As Precious As a Rice Seedling (1984). Its second edition, l987, includes twelve from her collection of prison poems, Why Cage Pigeons? Some of these poems were also published in Pintig (1985), an anthology of prose and poetry by political prisoners, as well as numerous other publications in the Philippines and abroad. In 1996, the UP Press published her collection of poems, Journey: An Autobiography in Verse (1964-1995).

She has written for Manila Standard since 1995 to complement the underground tracts she wrote on the woman question, democratic centralism, the united front and revolutionary mass movements in the period when she was hunted. Her 48 video documentary titles, produced, written or directed by her (1989-1997), can be seen on her Web site: http://www.sequel.net/~pinoytok. As a webweaver, a term she invented, she has designed her own web pages as well as the website of an NGO.

She is teaching at the DECL, CAL, University of the Philippines. Aguilar is at work on her seventh book of poems, tentatively entitled Poemes Suisse. She has temporarily postponed finishing her semi-autobiographical novel, One Woman's Testament, as she completes her long-delayed work on Tricksterism as a Filipino Survival Mechanism.
Posted by ALBERT B. CASUGA at 12:55 PM

Thanks, Albert. I am out of words.