A WRITER'S NOTEBOOK: ON "BASURA DAYS" 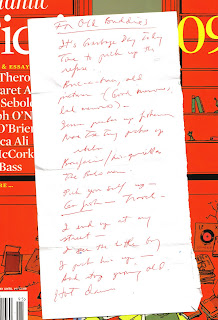 A WRITER’S NOTEBOOK: ON “BASURA DAYS”

My daily constitutional is a three-kilometre walk to my daughter’s house where, by noontime, I am able to join my wife and grandchildren, Chloe Dominique and Louis Martin, for lunch.

Along the way, on Garbage Day, I distract myself with the refuse I espy on thrown pell-mell into the city-mandated bins. Mississauga remains a clean city because of these containers; and I --- willy-nilly --- guess at the ethnic backgrounds of the sources of this garbage as I walk along the bin-lined sidewalks. A diaspora of diverse immigrants, their garbage is equally diverse; I find discarded mementoes among litters of ethnic newspapers, (French, Italian, Indian, Portuguese, Irish, Scots, Filipino, Spanish, German, Chinese, a truly multicultural community) on Fifth Line West Street.

Why not write about discards, this avenue of the rejected? This salon of the rejected? By the time I got to Robin Drive, I had a poem heavy on my head. I jotted some notes before the two Francophone grandchildren could overwhelm me with chatter that I look forward to at the end of my walk.

Because the context provided me with a chance to write a poem using the languages of this diaspora, I thought I would get Dr. Isagani R. Cruz’s attention by putting form to his theories on multilingual literature.

Blog-time got me playfully writing a poem that stretched from one to six sections, a virtual objective correlative to my constitutional. From garbage, I would find some haven that centrifugally spun from the images of the garbage-lined street.

“Basura Days” took on the format of a Wasteland. When I got feedbacks from literary scholar Isagani R. Cruz and Philippine poet Francisco R. Albano, OSB, I was surprised to realize that the poem virtually wrote itself on a centrifugal-centripetal energy that was described by Rev. Albano as mystical.


(Firing me an email, poet Albano analyzed the poem)


“In the name of all, specially of senior citizens, thank you for the poem.
“My reaction after reading: Silence. Then sartori. I shall read the poem to my Aesthetics class this semester.
"Word" of multilayered meanings, of the last stanza climbs the ladder from garbage to dangerous historical memories, to book, . . . to Verbum Dei which blesses the poem with transcendent mystical quality.
“And I remembered an old journal entry of mine:

CUMPLEANOS ON GOOD FRIDAY
Today I complete another year in God’s Kingdom.
I awoke, rose to the chirping of swallows,
Went out to the veranda to praise the Lord
For wide sky and long sierras and a valley heavy with corn.

And suddenly I remembered a parable from Down Under:
There was this master of a an estate who called
One of his servants and gifted him with a superb stallion.
This is for you, the master said.
And what about me, said another servant. Do I get anything?
Oh, said the master; see that stable there? It’s yours.
And the servant ran to the stable, opened it and saw it
Full of shit from ground to ceiling.
At once he got a shovel and started digging, saying:
There’s got to be a horse in here!

[This is the word of the Lord.]

In response, I sent this e-mail:

Dear Dave,
Because of readers like you, I continue to write the poems that otherwise would be left unwritten, buried in my skull. Thank you for the the reminder on the WORD, and the parable from Down Under. Isagani Cruz sees the parable, too, in Basura Days...Sa Basura may langit din -- Indeed, has anyone written about basura in mystical measures? I like your last line: poetry in garbage-shit. Poesia hallada de basura mierda. Much like the Dhamyatta -- one dies in order to find life. One digs deep through this stable of mierda (Styx, the last time we looked) in order to find the horse there. There's got to be a stallion down there. Abrazos, hermano. Until the next poem? ALBERT

In his LOL Literature in Other Languages, Dr. Isagani Cruz reacted to “Basura Days”:

Multilingual poem by Albert B. Casuga
“There are all kinds of variations to the saying that "we use German (or English) to talk to dogs, Italian to talk to lovers, French to talk to cooks (or soldiers), and Spanish to talk to God." For example, some old folks in the Philippines say that we use Tagalog to talk to maids, English to talk to foreigners, and Spanish to talk to God. While sayings of that sort today sound racist, they do point to a genuine theological problem: what language does God use to think (assuming that divine beings think in the way we understand the word)? The answer, of course, is that God thinks in all languages. The best way to reach God then is to write in as many languages as you know at the same time.

Albert B. Casuga's most recent poem, "Basura Days," takes the theme of Christianity as T. S. Eliot understood it and applies it to today's most universal phenomenon, namely, garbage (trash, junk, shit, or whatever you want to call it) and builds a modern parable taking off from the Biblical insight that whatever we do to the least of God's creations (animate or inanimate), we do to God”

In my blog comments to Dr. Cruz’s comments, I facetiously asked if he is providing a theological rationale for multilingual literature.

It was a playful percolation of refuse images, then it turned pious, angry, and -- for old friends --- solicitous. Pray that I have not elevated garbage to a status of Eucharistic surrogacy. We might yet find a good poetic excuse for colonization. Their languages for our Weltanschauung --- fair exchange?

It occurs to me at this point that multilingual literature could be an antidote to an inchoate Phil Lit.”

For the archives, here is a translation of the Filipino section of “Basura Days”.

Onto my dying days, I, an old man on the streets of dung,
Shall recall to any lad or lass who would listen:
The Honourable and Supreme Organization of the Country’s
Children (KKK) destroyed the Spanish colonial master
Who sold the Philippines to America and also cut the Yankee
Balls asunder so that the Philippines would again reign free.
And the Bolo Men? Did not its freedom fighters wreak havoc
On Japan’s bow-legged troops to win yet another war despite
The tardy return of General Douglas MacArthur who pledged:
I shall return? They, too, these impoverished compatriots,
Veritable recruits from the dumpster bins of Colonial Fate
And fortune, have overcome the grim disasters be they wars,
Floods, martial law, GMA (Gloria Macapagal Arroyo), etcetera.
In Manila this time around, there’s garbage below, garbage
In the center, and garbage, too, above.

Poems are hard to come by these days, but when I find them pummelling my brain while I walk for my senior-citizen’s santé, I grab the ligne-donne, and run away with it.

Let me speak what I couldn't explain: the "basura," the stallion, your poems - I got immersed in your notebook. Bravo Sir Albert! Thanks for sharing. GOD bless po --- Rose