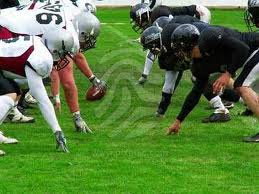 NUMBER SIXTY EIGHT
(For Matthew, On His Football Debut)
Was it a random number, or did you choose to call
attention to grandmother’s sixty eighth birthday?
She peered through her camera but could not see
you nor make you out among these  gnashing giants
who could have been the drooling babies not so long
ago.  She lets out a gasp of delighted surprise
when she espies you on the zoom. How do you
zoom in on his face? She asks; I plead ignorance
with a dinosaur’s shrug.  From afar, she still sees
that little boy who could not even throw a ball.
Omigod, look at him barrel through that lad blocking
his run! He would hurt the boy or get himself broken!
I could not help but look for that’s what I came to
watch his football  debut for: Who will dare bump him?
My little boy, all bulked up, war-primed, brute strong,
could throw that pigskin to Lord knows where, oh yes,
pitch the first blocking body, too. Bloody idiot, he
would snap, but if he were  within hearing distance, she
would upbraid him: Matthew Francis, your language!
She watches him through her tear-stained lenses,
sighs, and stifles a cry: My little boy is a big man now.
At sixty-eight, myself, I felt suddenly old and weak.
---Albert B. Casuga
09-21-11

At 14, Matthew Francis Casuga, third eldest grandchild, was an instant choice by a drooling coach when he applied for his high school’ s football team. A little while ago, he was just our little boy who would weep at the sight of a fly on his arm.
Posted by ALBERT B. CASUGA at 7:41 PM