BAILEY'S BALOON 2: IS GOD A MIRACLE?

BAILEY'S BALOON 2: IS GOD A MIRACLE? 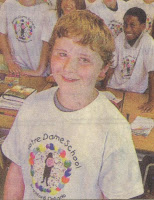 When Bailey Pinto, 11, of Brantford, Ontario, released his helium balloon into the balmy late-spring air with a letter addressed to “God in Heaven and asking whether miracles happen”, he did what typical believers often do: shoot his prayer like “an arrow into the air” that would probably fall “to earth one knows not where”.

What is heaven like? He asked. Was it perhaps a mute plea from a child who has suddenly found himself without a mother, and cared for by a single father, a reservist soldier who would soon be assigned to active duty in Afghanistan? What if he dies in combat? What if he would not come back this time as he did from Kosovo and Bosnia during his 14-year tour of duty with the forces? What awaits him in heaven? (Obviously, the other place is not an option.)

Do miracles really happen? This auburn-haired lad would want to know. Could this have been an unstated prayer for the father to be out of harm’s way, especially at this time when some 100 Canadian soldiers have come back in body bags?

Or was it a cri d’couer of a child who, at the cusp of teen-age, is confused about missing a mother’s hugs and emulating a father’s “steady-as-it-goes” grit-your-teeth stance? Will a miracle be sent their way, he and sister, Alexis, 8, if he addressed his erstwhile pen-pal balloon to God instead?

A well-intentioned, good-hearted lawyer, Gary Batasar and his wife, picked up the fallen balloon with the missive to God on their driveway in far-off Brampton, Ontario, and the barrister (who ironically is a well-known criminal lawyer who does not shy from defending killers and drug dealers, according to the Star) wrote Bailey back and told the Notre Dame Catholic School correspondent that heaven “was a wonderful place filled with love, life, and laughter, where children play, families reunite and adults love each other regardless of religion, ethnic origin, class or colour.”

Bless their souls, the couple sent Bailey’s entire class under teacher Andy O’Brien T-shirts emblazoned with the image of a child holding a pink balloon, looking up into the air, and the words, “Dear God. What is it like in Heaven?”

As a retired Catholic School Trustee, my first impulse was to write the school board of Dufferin-Peel, and celebrate the “occurrence” as an example of how to call attention to the faith-based principles of Catholic education (which has been in a non-sequitur way under siege lately because of news about some trustees fraudulently and excessively spending taxpayers’ money at the Toronto Catholic District School Board of Trustees who have been replaced by the Ministry of Education-designated supervisor).

On second thought, I demurred. I realized that holding up the flotation of balloons in search of God as an exemplar of “good practise of the Faith” could be misunderstood as light-headed voodoo religious magic, if not downright misdirection of religious fervour.

Where is God? is a legitimate theological question, but perpetuating the concept of a God-in-the-sky, a sulking God, angered by man’s inhumanity to man (the wars in the name of God-Allah-Yahweh have not abated since the Dark Ages, thanks to fundamentalism and terroristic jihads ) is duplicating the errors that may have led atheistic authors like Christopher Hitchens (God Is Not Great) and Richard Dawkins (The God Delusion) to question the basic foundations of believers’ faith in the existence of God. It is disturbing that they have since then acquired supporters themselves, and popularized secularism, agnostic humanism, and religious relativism.

In my earlier blog entry, “Bailey’s Balloon” (May 31), I wrote a poem as a “reply” to the letter sent via the balloon. “He has never left your side/ When you let it go to look for where his miracles abide” --- is probably as prudent and as eschatologically acceptable as I could manage without reverting to the Pollyanna-assurance which we are wont to use in our short-cut catechism--- Heaven is where everything is happy, because God is there.

How so? God must have abandoned this Earth because man has been so unhappy through the world wars (I & II), the 9/11 tragedy at New York’s Zero Point which has bred more unhappiness in the borders between Canada, USA, and Mexico; the wars in the Middle East, the genocides in Rwanda, global recession, drug cartel murders, obscene corruption in Governments from the staid British Parliament to the insouciant, irrepressible House of Representatives in the Philippine Republic, and other banana republics ad nauseam? These make us miserably unhappy.

It is not too early nor too late to counsel our youth that God is not in some distant heaven that lads and lasses must float those supplicant balloons. St. Augustine said all one had to do was look closely into one’s heart, and there God is. For was man not made in his image? Man is in God as God is in Man.

But the burden of proof, according to Nobel Laureate Bertrand Russell, is on the believer to demonstrate the existence of God. One does this through St. Thomas’ Summa Theologica, with the most cogent arguments in philosophy and theology. Or the believer can point out to godliness in his environment and his social milieu, a posteriori.

Last May 31, the Sunday of the Pentecost, the Catholic Faithful were reminded about the gifts of the Holy Spirit – Faith, Love, Wisdom, Gentleness, Hope, Kindness. Justice. Wherever and whenever man sees these gifts shine as a light through the gloom that a lot of humanity has gone through, there he would find God.

I followed a couple of senior citizens, on my morning constitutional today, and I marvelled at how silently they walked hand-in-hand toward a Tim Horton’s shop for their early-morning coffee and doughnut. The smile on their faces was infectious. It must be love; it must be caring. I could not help but engage them in a brief banter:

“Had I brought my camera with me, I would have loved taking a picture of you folks walking hand-in-hand, firmly holding each other,” I remarked.

The gentle man, easily an octogenarian judging from his white hair and wizened wrinkles to his ambling gait, responded:

“Good humour, too”, I murmured to myself. God’s laughter is still here among humans.

“Too many people are caught up in speculation about the nature of God instead of seeking to follow the teachings. The temptation to think theologically can obscure the responsibility to act ethically.

“Once we stop confusing speculation with action, we may be better able to live by the teachings of God. Living by the Ten Commandments, for instance, can make us practise religion whether or not we fathom its source. In the words of the French-Jewish philosopher Emmanuel Levinas, ethics comes before metaphysics.”

Even Christopher Hitchens, somehow validates the rabbi’s polemics when he said in a May 30 interview with the Cathy Kelly of the Star.

“I’m often asked…where my morals come from --- assuming I had any --- if not from the divine. I always reply that I think that’s an insulting question --- as if I wouldn’t know the difference between right and wrong without supernatural permission.”

The Baileys of the world need not release search-for-God balloons. Even in the direst of poverty and privation, God is there. Someone is bound to work for the poor’s amelioration – politician or volunteer. It does not matter. What matters is that social justice will preserve their dignity as persons made in the likeness of God.

Is man truly made in the likeness of God? While I can prove this metaphysically and theologically, I would not bother lest I miss the “many splendored thing.”

I love; therefore, I am alive. If God is Love; therefore, God is alive. Is God Love? That to me is the lesson of all Holy Scripts. From the Quran to the Torah, to the Christian Bible.

Among the despairing, God is there. In Francis Thompson’s Hound of Heaven, it is not man who pursues Him – He pursues even the hopeless.”

“Halts by me that footfall:
Is my gloom, after all,
Shade of His hand, outstretched caressingly.”