STILL POINTS: POEMS FROM THE HOUSE OF TAO 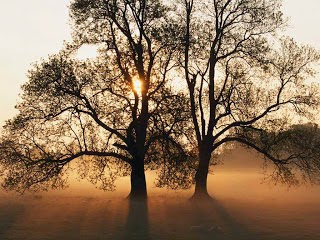 STILL POINTS: POEMS FROM THE HOUSE OF TAO


This returning to the root is called quietness. –Lao Tzu

Waking up is excuse for one's return.
It is for these that leaving home
is an endless returning --
not for lost illusions
nor petty indecisions
do we return
nor for hurts our second coming,
but for grass untrod,
footsteps' echoes unheard,
where they have since then become
hollow laughter caught in domes
of running cups turned down
to celebrate our own absurd gestures
of trying to accept the virtue of dying
known to us only
because it is a manner
of returning to the root
and quietness our own
undiscovered country's
beginning


A circle’s cipher shapes the sound of dreams;
it is the sound supplants what fury blood has built.
The House of Tao Te Ching makes shadows
of us all:
of our cracked voices a whimper
of regret,
of our guilt a pact
of weary visions
or indecisions to empty
our running cup
of schemes -- variations
on a theme streamed through a gloom
of circle’s ciphers.


There is no Design but the petering pattern
of wilt
on petals
or gore
on genitals.


Shadows in holes are circles.
The circle is a hole.
All things are vain given time
to mute the pain of dreams.
Time is allied with the Worm
sundering the form of murk and silt.

Dread is all there is to look for:
all fears found all found fearful
the undiscovered country touched
for moments of eternity not there
pour between fingers,
time watching time colour
blind’s grey Journeyman’s carousel
among the stars.

Between the egg and the sky or whatever space
is allowed between them, heaves the Tension.
Surely, between whatever binds everything to nothing
and the trace of distinction between life and dying
is nothing’s extension.
And still the end of this space is his beginning
to know where ends he whose touch is the question.

FROM THE AUTHOR'S NOTEBOOK:
If the zero point is the point of no return but whence springs death and life and the entire circle, is it also the still point to which all energies must return? Is it the center?
If the center is also the beginning and the end, is it also the "undiscovered country from whose bourne no traveler returns"?
In Little Gidding, T. S. Eliot wrote: "We will never cease from our exploration/ we will go on exploring/ until we come back to our beginning/ and know it only for the first time."
If the end of exploration is also its beginning, there cannot be movement where movement moves. Therefore, nothing is really everything. From nothing came everything. In Hemingway's words: "Nada y nada, y pues nada." Is this the neo-nihilism that has become the inconvenient truth?
What did you say? Nothing.
In Silence we trust.