THE RHYTHM OF MIRACLES 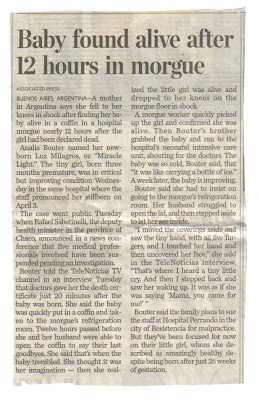 
Baby found alive after 12 hours in morgue.... “Mama, you came for me.” ---Toronto Star, 04-12-12 headline.  Associated Press report in the Star quoting a TeleNoticias interview .

And yet,/  night will not touch this cargo.---Luisa A. Igloria, “Fire Report”  Via Negativa

1.
Bare hours between them happening,
Will it spell the rhythm of miracles?
The maw of a bay and its clean beach
Would have been a an easier grave
For a wayward plane soon jettisoned
By its airmen, but it fell on dwellings
Instead, razing homes and lifetimes,
But could not kill one baby in its crib.
No casualties, media reports around
The globe, not this child in his arms
As he chokes on his stuttered TV words:
Can anyone survive this helluva  fire?
The village folk quickly call it a miracle.
Children cut down in war need one, too.


2.
Oceans away, where there are orchids,
Music, dancing, and wine, the gloom
Of doctors decreeing to quickly inter
What they pronounced a still-born child,
Rocked the stillness of a semana santa,
When from its wee coffin in the morgue
She cried in a tiny but jolting whimper
Only mothers can hear from their wombs.
When she fell to her knees at that vault,
Her mother said: “... as if she was saying:
“You came for me.” Te vuelva para mi.*
No, Luz Milagros, you returned to me.
Elsewhere, countless children will never
Go back to their villages. They cannot.

What an incredible story. Beautiful poem.