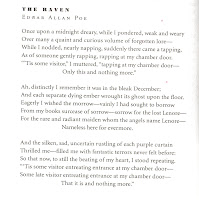 Style in poetry is best manifested in the use of the medium. Poetry uses a usually patterned or measured language. The word “usually” is used advisedly because not all poems use measured language. Vers Libre or free verse does not use the regular measures, but it follows the rhythm of thoughts, feelings, and even speech/breathing spans.
(Click on Image to read text)

When the critic renders a judgment on the style of the poet, he invariably criticizes the author’s use of his literary devices: both the literary and verbal energies of the language.

1. Verbal. Poetry, from the beginning of its composition, was made to be recited. This is the reason why poets who know their craft never abandon the use of the verbal energies of their language to objectify and subjectify their experience. How do these sound devices help in achieving the artistic (poetic) purpose?

a. Phonemes. The English language --- or any language for that matter, most especially the Chinese --- prides itself on the ability of each phoneme (articulated unit of sound equivalent to the letters of the alphabet) to exude a meaning depending on its duration, inflexion, volume, and pitch. Each sound, therefore, has the capacity of expressing a mood, a feeling, or even a thought.

For instance, English speaking people consider their long “O” and long “U” (as in “gold” and “tune”) respectively as their most expressive sounds. A preponderance of these sounds in any poem should not simply be considered a mere accident of composition. A poet who is sensitive to the possibilities behind the use of these phonemes will see to it that his use is contributory to the achievement of the twin purposes of objectifying and subjectifying the poetic experience.

Therefore, when phonemes are dominant in a poetic line or in the stanza, or throughout the poem, they must have a purpose. They must have a function.

For instance, Frost uses a preponderance of the “S” sounds and the long “O” sounds as aids in the establishment of the mood of the poem (“Desert Places”), the physical atmosphere, and also the internal condition of the persona who is seen ruing the emptiness that he perceives from without. (See blog entry on Analysis)

According to Gerald Sanders in his A Poetry Primer (1), certain sounds in English suggest meanings which may stand on their own. For example: the long vowel sounds (a, e, i, o, u) suggest slow movement; the short vowels suggest motions done in a hurry.

“Of the consonants, the liquids (l, m, n, r) combine easily with other words and are used frequently where the verse is to be read rapidly. On the other hand, a group of consonants called mutes are the most difficult to utter because they close air passages, hence, are used to suggest impediments and to force a slower movement of the verse. There are three groups of these: labials (lip sounds) b, f, p, v; dentals (tooth sounds) d, t, dh, th; and gutturals (throat sounds) hard c, g, k. Still another group of consonants, the sibilants z, sh, zh, are used to gain such effects as surprise, solicitude, amazement, and contempt.”

The different sounds in English offer a wide range of significance which would, when recognized by the sensitive writer, enhance the tonal quality---the melody---of his poetry.

Sounds, no doubt, should make sense in the poem.

Of course, non-native speakers --- unless they have mastered the language --- may find it difficult to assign these phonemes with the significance they want.

But it is taken for granted that when these sounds become components in the word, their function and significance are dictated by the semantical meaning of the word.

When sounds are used in an unnaturally recurrent manner without any recognizable function, the may result into doggerel or irritating alliteration.

b. Organized Sounds. Alliteration, onomatopoeia, assonance, consonance are used by the poet to emphasize content words especially those found the rhyming ends of the poetic line. They must, therefore, contribute to the achievement of melody and rhythm. When poets use them without any apparent purpose---either melodic or structural--- (they may also serve to organize images), they ordinarily degenerate into senseless ornaments. Ornaments are hardly needed in poetry which is a composition characterized by conciseness and integrated compactness. Economy of expression demands that no organized sound units be used as pretentious ornaments.

c. Rhyme. Defined as the similarity of end sounds and words in the poetic lines, rhyme may be used either as a melodic or organizing element.

As a melodic element, it emphasizes words and sounds which carry the poem’s significance. As an organizing element, it shapes up the materials into stanza forms for purposes of unity, clarity, and the fulfillment of the demands of the subject matter.

Effective rhyming is in pursuit of these two functions. When rhyming does not help in the suggestion of the experience being objectified and subjectified, it may end up as doggerel or as an unexplainable choice of key words.

d. Rhythm. Like Rhyme, it also serves as either a melodic or organizing element. Its choice is no accident. Usually, the sensitive poet chooses a rhythm that approximates the mood, tone, content of the context being used, or feeling.

Certain traditional significance may also be attached to different types of rhythm. For instance, the iambic pentameter has always been considered as the traditional rhythm for the villanelle or the Miltonian blank verse. It is said to be the most sober, and it approximates the naturally rhythmical Anglo-Saxon speech.

Provided it helps in the concretization of the experience, the rhythm used is said to be appropriate and necessary. Its effectiveness lies on whether or not it is capable of evoking an emotional reaction in the reader. E. A. Poe’s “The Raven” (2) uses a rhythm which is akin to soulful mourning, --- slow, deliberate, and stately --- so that one is easily affected by the macabre effect of anguish and gloom that the poet tries to convey.

2 Poe analyzes the genesis of “The Raven” in an essay entitled “The Philosophy of Composition,” Graham’s Magazine, April, 1846. Anthologized in A College Book of American Literature, Ellis et al (Eds), Pg. 421 etseq.

Poe said: . . .I pretend to no originality in either the rhythm or meter of “The Raven”. The former is trochaic---the latter is octameter acatalectic alternating with the heptameter catalectic repeated in the refrain of the fifth verse, and terminating with tetrameter catalectic. Less pedantically---the feet employed throughout (trochees) consist of a long syllable followed by a short: the first line of the stanza consists of eight of these feet---the second of seven and a half---the fifth the same---the sixth three and half. Now each of these lines, taken individually, has been employed before; and what “The Raven” has, is in their combination into stanza; nothing even remotely approaching this combination has ever been attempted. The effect of this originality of combination is aided by other unusual, and some altogether novel effects, arising from an extension of the application of the principles of rhyme and alliteration.


Next: Part 4: Criticizing the Style of Poetry --- Literary Devices (Words Have It)
Posted by ALBERT B. CASUGA at 3:52 PM