PART 5: CRITICIZING THE TECHNIQUE OF POETRY 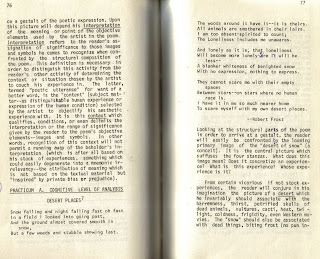 Part 5: Criticizing the Technique of Poetry


Selected materials and compositional prowess generally do not achieve the artistic purpose alone. They must be articulated and presented in a technique which may produce an interesting for the poetic experience.


A. Presentation of Selected Structural Parts. It is a basic assumption in the appreciation of a poem that, if the author can suggest significance through the structure printed on the page, he will do it. Analytical reading favours the student’s attentiveness to certain suggestions made by the structure visualizing the poem’s meaning.

And since communication is not only semantical and syntactical articulation thought but also structural suggestion of message (meaning “the medium is the message,” as Marshall MacLuhan puts it), (1) the poet reinforces his communication potential if he harnesses his structural arrangements of details in the form. Thus, the arrangements of words, stanzas, image-structures, letters, and the like may contribute to the visualization of the meaning.

When the poet takes advantage of this technique peculiar to the visual arts, he must not, however, sacrifice the primacy of the literary devices in the function of subjectification. In other words, the structural arrangements are there simply to provide an interesting visage for the objectified phenomenon --- the poem on the page.

The primary structural part --- the central image --- must pervade in the poem; i.e., it recurs throughout the poem. Technically, this means the poet either directly includes a facet of this central structure in each part, or he suggests its presence throughout through synecdochal images.

For instance, in “Desert Places”, the desert of snow is suggested in every stanza in terms of the key words distributed adroitly by the poet; viz., ground covered with snow, few weeds and stubble showing last, woods have it, all animals smothered in their lairs, blanker whiteness of benighted snow, empty spaces --- all culminating in the final assertion which ends with the persona realizing that the “desert places” are within him.
The minor images, of course, must be evenly distributed throughout the poem such that they recall the major image if not reinforce it.

Language devices are responsible for positioning these images in such a way that cannot but result into a complete picture when they are placed in context. The poet needs certain linking concepts in between these images if he is to succeed in unifying the disparate pictures. Figures are such concepts. In “Desert Places”, the personification “the loneliness includes unawares” links the persona (a minor image) to the central image, until both merge in the over-all picture: the unified gestalt.

An injudicious spraying of images in an arbitrary manner is not useful in a poem which is not purportedly a presentation of random awareness. Automatic writing of the Surrealists includes the writing down of objects of awareness apprehended at random with the end in view of letting the accidental juxtaposition of these images result into meaning.

The formally excellent poem rarely succeeds in emotionalization or subjectification when it remains on the level of mere objectification, which is what happens in automatic writing. Mere presentation of the picture seen in disparate planes of consciousness does not mean anything save the fact that here is awareness.
Poetry is more than objectification in that it is also an interiorization of the external reality so that this reality may be transformed into the energized conception of the artist. Naturally, this conception will be more alive --- because of the subjective comment --- than the unslanted objective situation used.

B. The Scale of a Poem. The poem’s scale is not arbitrary. When the poet’s experience demands a mode of objectification, chances are that the poem’s length follows the dictates of the subject matter. Ezra Pound’s decision to cut “In A Station by the Metro” from the original 30 lines to the two-line version is a classic case of artistic consciousness about the correctness of scale. (2)

Proceeding from the fact that the subject or content is simply an apparition, the author must have realized that the fleeting quality must be objectified in as brief a manner --- two lines.

Stanza forms, the length of the composition, its lines, and the verbal dimensions vary according to the different types of poetry. Lyric poems generally use shorter stanza forms; narrative and dramatic poetry use either ballade forms or the longer epic forms since they must convey a story.

The traditional forms like the triolet, rondeau, villanelle, sestina, sonnet, ballade, and the like, are governed by rules peculiar to their composition.

For instance, the sonnet form as used by Elizabethan writers retains the practice of crystallizing the assertion or argument of the poem in the last two lines which is always a couplet. While the first twelve lines may either be composed of an octave and a quatrain, or series of three quatrains, the last two lines remain as clinchers.

Villanelles introduce unity into the 19 lines through the repetition of the first and third lines of the first stanza. These are usually “content” lines in that they crystallize the persuasion of the poem. Since they are sometimes made to be sung, they are normally in pentameters. Rhyming is normally along the masculine-full rhyme variety.

Vers Libre, however, follows a scale pattern which is consistent to the patterns of thought or span of speech. It is more faithful to the workings and exigencies of the creative mind whether the composition proceeds centrifugally or centripetally.

A scale which best serves the demands of the subject matter, context, theme, or structural unity is considered appropriate and effective. For instance, the scale of “A Theory of Echoes” is appropriate because the pattern of reversals in the echo must be shown. The first two stanzas are symmetrically countered by the last two; the lines are also reversed in the last two stanzas to objectify the concept of echoes and their being extensions of sound, that contraries are actually part of a universal unity according to Heraclitean cosmology, E pluribus unum. (From the many, one) The axiom is: “opposites are different aspects of the same thing.” Hence, death is simply an extension of life, and some such applications of the concept. (3)

The scale of “The Desert Places” is effective because the fist three stanzas provide the premises for the gradual growth of the loneliness in the persona such that the mood actually grows on him as he describes the external conditions while he gets affected. As far as the burgeoning of emptiness in him is concerned, the gradual dawning of the realization is objectified also in terms of the scale in a manner that the realization comes only in the final stanza after an inspection of the barren scene outside as described in the first three stanzas. (4)

It is not sprung upon the reader without a foreshadowing. The reader is adequately prepared to accept the assertion in the final stanza. In other words, the scaling or pacing in the stages of awareness correspond to the gradual growth of a realization in the persona who is shown reflecting on his external situation before he relates this to his internal condition, his life, in terms of an extended realization: “They cannot scare me with their empty spaces… I have it in me so much nearer home to scare myself with my own desert places.”

Scale becomes doubly important in the use of ideographic devices on the page. Aside from imaging the content, the scale also suggests the point of the poem---i.e., the poet’s comment. For instance: “Frogs”.

The
Frogs
in Mrs. T’s
pond whistle,
Sanchez shouted once
in his sleep. Next day, Mr. T
killed all the frogs in the pond. (5)

The positioning of the protagonists in the triangle is a study of conscious scaling. Sanchez, the man in the middle, is placed between Mr. and Mrs. T with whom he (Sanchez) maintains a two-sided, perverse, and illicit affair. The triangle (ménage a trois) itself is necessary to “image” the content.

2 Ezra Pound, as quoted by Cleanth Brooks and Robert Penn Warren in Understanding Poetry, pg. 90. Here is what Pound himself writes of the origin of his poem:

“Three years ago in Paris I got out of a Metro train at the La Concorde, and saw suddenly a beautiful face, and then another and another, and then a beautiful child’s face, and then another beautiful woman, and I tried all that day to find words for what this had meant to me, and I could not find any words that seemed to me worthy, or as lovely as that sudden emotion… I wrote as thirty line poem and destroyed it because it was what we call a work of second “intensity.” Six months later, I made a poem half that length; a year later I made the following. . . sentence:“The apparition of these faces in the crowd;
Petals on a wet, black bough.”I daresay it is meaningless unless one has drifted into a certain vein of thought. In a poem of this sort one is trying to record the precise instant when a thing outward and objective transforms itself, or darts into a thing inward and subjective.”


3 A Theory of Echoes


Not unlike the axiom of a day:

All things go up to fall the way


A day axiomed as not what is unlike
The way the fall of things strike:


Snow falling and night falling fast oh fast
In a field I looked into going past,
And the ground almost covered smooth in snow,
But a few weeds and stubble showing last

And lonely as it is, that loneliness
Will become more lonely ere it will be less—
A blanker whiteness of benighted
With no expression, nothing to express.


PART 6: Criticizing the Techinique of Poetry: Order of Structural Parts
Posted by ALBERT B. CASUGA at 3:49 PM